The UK’s second city could see its Build to Rent (BTR) portfolio grow further after plans were announced for a new 720-home community in Birmingham.

The latest figures from the British Property Federation and Savills, who jointly track new Build to Rent developments across the country, revealed that Birmingham almost doubled its pipeline from 4,800 BTR homes to more than 8,000 in the 12 months to the end of 2019.

Now Moda Living, a leading developer, operator and owner of BTR homes, along with joint venture partner Apache Capital Partners, is ready to go live with plans later this month for the delivery of a 720-home development in the city, with Moda having worked closely with Birmingham City Council throughout the process.

Subject to planning permission being granted, the new project would be Moda’s second site under development in the city, following on from ‘The Mercian’, which at 42 storeys high is Birmingham and the Midlands’ tallest residential tower under construction. It was recently granted a further 13 storeys by Birmingham City Council.

The construction of The Mercian has been financed by a £118 million debt facility from Goldman Sachs, representing the US investment bank’s first ever UK BTR development loan.

Family-backed Moda and its JV partner Apache Capital now have £850 million of live schemes under construction across the UK. This is the first phase of its planned £2.5 billion pipeline of more than 7,500 rent-only homes as it seeks to be one of the major players in one of the property market’s fastest-emerging markets.

The joint venture has the largest privately funded Build to Rent platform in the UK, attracting £400 million in capital. This includes investment from major UK and US institutional investors such as Harrison Street and NFU Mutual.

Once the projects are completed, Moda and Apache Capital will account for a total investment of £445 million and 1,200 homes in Birmingham, supporting the city’s ‘Big City Plan’ and accounting for 24% of the council’s target of 5,000 new homes.

Moda’s new homes will aim to cater for a wide-ranging demographic, including young professionals, downsizers, sharers and families. Residents will benefit from access to a host of on-site amenities, with mental and physical health and wellbeing key considerations.

Facilities will include gyms and 'wellness' zones, green spaces, roof terraces, communal lounges and workspace, all included within the rent. In an attempt to challenge the current rental market, Moda says it will offer deposit-free, pet-friendly renting ‘with secure yet flexible tenancies to give residents a sense of ownership’. The firm also promises a service which is 24-hour, on-site and professionally managed.

To bring the new development to fruition, Moda has been working closely with the site’s freeholder - Birmingham City Council - to convert the 2.6-acre, brownfield site at Great Charles Street into a thriving neighbourhood with new homes, shops, amenities and ‘vastly improved’ public realm.

A public consultation on Moda’s Great Charles Street plans will be held on February 26/27 from 3pm–8pm at St Paul’s Church, St Paul’s Square, B3 1QZ.

“We are thrilled to progress with our Great Charles Street development, our second site in a city we love,” Tony Brooks, managing director at Moda, said. “We strongly believe that Birmingham is not only a great city to live, work and invest in, but also to thrive in - and we want to offer a unique way of living to the people of this amazing city for years to come.”

He added: “Our Build to Rent projects are changing the way people live and make their home today. We provide more opportunities, amenities, options and facilities than ever before, all built sustainably with an especially strong commitment to their local communities.”

He said the consultation will be an opportunity for people to view and comment on the proposals to regenerate a significant and highly accessible brownfield site on the edge of the Jewellery Quarter.

“The site, currently a car park, will hopefully be an exciting new neighbourhood in the prosperity of the city. The local authority has been fantastic in helping to guide us on our journey,” Brooks concluded.

Ian Ward, leader of the council at Birmingham City Council, who also sits on the Strategic Economic Delivery Board of the City, said of the proposals: “We are delighted to see Moda progressing with these impressive plans to transform this long vacant plot in the heart of our city. Bringing quality, new housing stock to the city is of paramount importance to this council. Our aim is to continue to create a world-class city centre by planning for the next 20 years of transformation and growth – and this project is an important part of that.”

Richard Jackson, co-founder and managing director of Apache Capital Partners, believes Birmingham has a number of things going for it as a rental hotspot, including ‘hugely favourable’ demographics, its status as Europe’s youngest large city, and the recent recommitment to HS2 from the government combined with other infrastructure projects being planned which is expected to further support inward investment.

“We have proven our model of high amenity, highly serviced multifamily housing works with Angel Gardens, where we are above target with lettings, and we aim to bring that standard of quality of Build to Rent development to Birmingham, raising customer expectations by creating homes that are fundamentally a lifestyle product,” he said.

Moda recently reached £850 million of schemes under construction by appointing Robertson as main contractor on its Edinburgh scheme earlier this month.

It officially opened its flagship Manchester scheme in October last year – a 530,000 sq ft, 35-storey, 466-home neighbourhood known as Angel Gardens - as well as starting on site at New York Square, Leeds, with a further 515 homes.

Further construction is also underway at The Lexington in Liverpool, a 34-storey tower that is part of the major Liverpool Waters regeneration project that is set to deliver another 325 homes.

With further projects across the UK in varying stages of design, planning and development, Moda insists it’s on target to be opening 125 homes a month by the end of 2021.

In other Build to Rent news, Grainger plc, the UK’s largest listed residential landlord, has announced that it’s targeting key workers and recent graduates with accessible rents at Clippers Quay, its Build to Rent scheme in Salford.

Prices for a one-bed apartment start at £900pcm, with no service charge or letting fees, and super-fast Wi-Fi also included.

Clippers Quay is the UK’s largest Build to Rent development outside of London, with all of its 614 homes designed specifically for renting. Grainger says the development is affordable for households with an annual income of £27,000 and offers residents access to various amenities, including co-working spaces, a private dining room, a mini-cinema and a 24-hour gym, all included in the rental price. The five-block apartment scheme also allows residents to pay to reserve the dining room for private events. 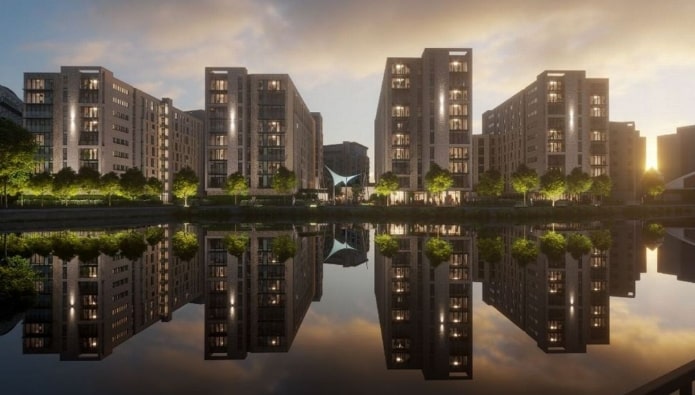 The £27,000 threshold – calculated at rent taking up no more than a third of a person’s annual income - makes an apartment at Clippers Quay affordable to sharers on a graduate salary, Grainger says. (The current graduate salary in Manchester is £20,870, according to the Centre for Cities). They are also within reach for teachers and nurses (starting salary of around £22,000) who are looking to share with a friend or partner.

Additionally, Grainger says it is hoping to encourage graduates who studied in Manchester to stay in the city by providing ‘accessibly priced, quality rental homes’, as part of the company’s mission to help regional cities boost their student retention rate. Manchester currently retains 51% of its graduates – lagging well behind London, which keeps 77% of its graduates.

The corporate landlord says that, to give renters peace of mind, it runs a ‘stay as long as you want policy’ with optional long-term tenancies. Its schemes are managed by Grainger directly, with on-site professional management and a concierge team to help residents with everything from collecting parcels to fixing faults.

Clippers Quay - which was named after the Clippers ships, famed for their speed in transporting tea and gold between Salford Quays and the USA - is well-connected by various tram stops and sits close by to both Old Trafford and MediaCityUK, as well as being only a 50 minute walk to central Manchester.

Helen Gordon, chief executive at Grainger plc, said: “The affordability and quality of housing in the UK remains a key issue, especially for renters. Grainger’s aim is to provide professionally managed, purpose-built, high-quality homes with a range of extra on-site facilities, such as gym, lounge and WiFi, free for all residents to use while still being affordable to people on ordinary incomes.”

“For many key workers in the public sector or young professionals who have just graduated, a good quality rental home close to work can often feel out of reach financially, pushing them to live further and further out, which harms productivity by forcing people into longer and longer commutes.”

Even in these troubled times, development work is still ongoing where...