A law firm has said the value of the UK’s top 15 senior living providers has increased by 62% in the past five years, up to £4.03 billion from £2.49 billion five years ago.

Boodle Hatfield, a 40-partner private wealth law firm, which has been in business since 1722, says the fledgeling sector has attracted a wave of private equity investment in recent times.

But it also argues that the industry will have to go through far faster growth to meet demand for retirement living outside of traditional care homes.

The firm says the care home health crisis during the coronavirus pandemic has highlighted the necessity of providing high-quality, lower density housing specifically for older people.

Senior living – a growing but still nascent sector in the UK – aims to enable older people to retain their independence whilst living in more luxurious surroundings than the typical care home, with a ‘wealth of facilities’ at their disposal. These facilities typically include restaurants, cafes, spas, swimming pools, communal lounges, fitness studios and salons.

Boodle Hatfield believes that the community facilities provided by senior living – also known as retirement living or later living - will be crucial in helping to combat loneliness amongst older people, an issue that has been exacerbated by the forced isolation of senior citizens during the Covid crisis.

Fresh thinking is certainly required, with successive governments for several decades failing to adequately come up with a solution to the adult social care crisis.

The UK’s senior demographic is projected to grow faster than the rest of the population, with an additional 3.9 million people of pensionable age expected by 2043, pushing the total figure up to 15.9 million.

What has driven the growth?

Boodle Hatfield says the increase in the value of the sector has been driven by expansion, with major providers rushing to construct new developments and increase their share in what is a rapidly growing sector.

Legal & General’s Inspired Villages arm has announced plans to build 2,500 specialist homes in the next six years, while Riverstone - which was acquired by banking giant Goldman Sachs - plans on building 2,000 new homes in London by 2027. Elsewhere, the AXA-backed Retirement Villages Group is targeting as many as 6,000 homes across 30 new sites by 2030.

Unsurprisingly, the growth potential of the senior living sector has attracted interest from private equity firms, as has been the case with Build to Rent and purpose-built student accommodation (PBSA) – the other two major PRS trends of the last few years. 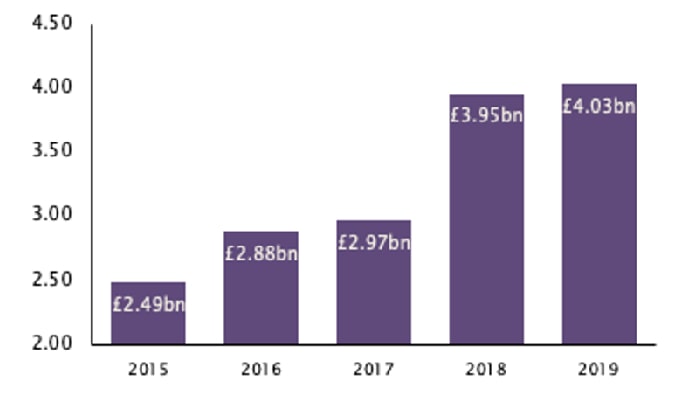 Luxury retirement community provider Beechcroft was acquired in early November by the US investment fund, Carlyle, whilst Lonestar has struck a deal to acquire McCarthy & Stone for £630 million.

“Senior living is growing fast, but this growth will need to be vastly accelerated if demand is to be met,” Adam Chamberlain, a partner in Boodle Hatfield’s property practice, said.

“It is a capital-intensive industry so bringing in funders such as PE houses and pension funds is essential.”

He added: “It’s encouraging that providers are responding to increased demand - however, the UK’s ageing population and a lack of suitable quality housing for seniors means that construction of senior living developments will need to be ramped up significantly.”

Chamberlain said coronavirus has made high-quality housing more vital than ever before.

“With many older people prevented from seeing relatives, there is an urgent need for communal facilities that will enable interaction and foster a sense of community,” he concluded.

“However, many families want their parents and grandparents to be living in an environment that offers more independence than a care home.”

Poll: Is senior living the answer to the UK's adult social care crisis?