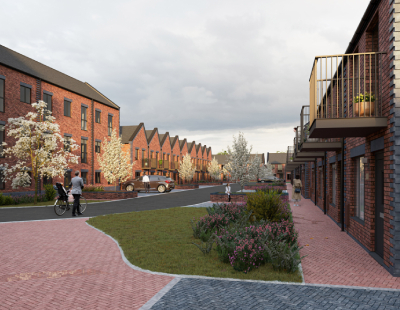 Work is set to get underway in the coming weeks on the construction of a new Build to Rent (BTR) development in Wolverhampton, which will bring 64 one and two-bedroom ‘quality private rental homes’ to the city.

The BTR development, the second in a partnership between Wise Living and Keon Homes, will sit on the former Springfield Brewery yard site on Cambridge Street, vacant until now for the last 25 years.

The beginnings of work on the site come as the BTR market continues to grow, even in the face of Covid-19 and the restrictions brought in to protect against it. More than £10 billion has been invested in the BTR market in the last five years, according to reports, with Birmingham and its surrounding areas earmarked as one of the major growth areas for the next decade.

The layout of the Cambridge Street development and the architecture of the homes have been designed to complement the local heritage of the area and its historical significance.

Wolverhampton was one of the most important cities in the Industrial Revolution, transforming quickly from a market town into a key manufacturing city.

It was particularly noted for making steel buckles and sword hilts, as well as steel jewellery. Other key industries were lock-making and japanning (making enamel for knick-knacks such as snuff boxes). Later it became known as a centre for car and motorcycle manufacturing.

It’s said that these ironworking foundries and forges, which produced a huge amount of smoke, ended up giving Wolverhampton and other nearby areas surrounding it the moniker of the Black Country – which still lasts to this day and divides opinion about which places are included and which aren’t. Another theory for the name is the abundance of coal in the region, including the working of the shallow and 30ft thick seams.

In the 21st century, Wolverhampton is probably best known for its Premier League football team – which these days includes a healthy collection of Portuguese internationals and a Portuguese manager and backroom staff – its impressive industrial heritage and its distinctive accent and dialect.

It’s one of the UK’s smaller cities, with a population of around 250,000, but does play host to a near-20,000-strong student population at the University of Wolverhampton.

Birmingham-based architects BM3 supported the design of the above BTR scheme to help bring forward the regeneration plans ‘that tick all the key planning boxes’.

Robert Simonds, business development director at Wise Living, said of the new development. “The Build to Rent market continues to show real resilience. In spite of the impact that the current pandemic has had on all lives, high demand for quality private rental properties shows no signs of slowing. In fact, we’ve even seen whole phases of developments reserved online in a matter of weeks. That’s why we are excited for construction on the Cambridge Street site in Wolverhampton to get underway. Once complete, the site will see a total investment of £9.3 million.”

He added: “It’s great to be able to bring another high-quality private rental scheme to the West Midlands with Keon Homes. When we first launched our partnership earlier this year with our Coventry development, it was always part of our strategy to deliver further sites together. Our values completely match in terms of our ambition to build quality rental properties that families in the UK demand.”

In January this year, Keon Homes and Wise Living announced they were working together on a 40-unit development in Tile Hill, Coventry, with the site providing brand new one and two-bedroom private rental apartments in the city, with move in dates available before Christmas 2020.

Warren Bolton, director at Keon Homes, commented on the new development in Wolverhampton: “We are delighted to have secured planning permission and completed on contracts with our development partner Wise Living. This is the second time our land-led model has sourced and secured land for our partner.”

He added: “Our Cambridge Street development will provide much-needed private rental accommodation which will help enhance a former derelict yard into a scheme the city can be proud of. Our design features, aesthetics and landscaping proposals that are sympathetic to the heritage of the area and complement the surroundings. We look forward to seeing this development evolve.”

Wise Living also has developments in Telford, Birkenhead and Mansfield, while a number of new sites are set to be announced in the coming months.

Anyone interested in becoming a development partner of Wise Living is asked to contact its business development director, Robert Simonds.

According to the quarterly BTR map of Britain from the British Property Federation, and put together by Savills using data from Molior, there are now 171,814 BTR homes in the UK, including both London and the regions, of which 50,821 are complete, 36,701 under construction and 84,292 in planning. In London, there are a total of 76,804 units while outside London there are 95,010 units.

The Studios24 – which delivered the first major co-living development in...

Following the reopening of England’s housing market in May, the sector...

Planning consent has been approved for the £400m regeneration of Kingston...