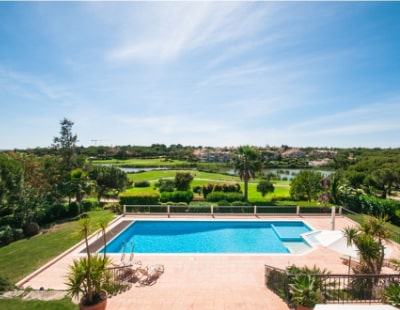 In the decades since Portugal became one of the go-to destinations for British holidaymakers, second home owners and investors, one part of the country in particular has stood out above the rest when it comes to investor-friendliness.

The Golden Triangle – the unofficial term for the mini-region in the Algarve, which includes luxury gated communities such as Quinta do Lago and Vale do Lobo, the charming village of Almancil and the tourist-friendly resort town of Vilamoura – has long enticed British investment, and investment from elsewhere, and that continues to be the case despite the troubles posed by coronavirus and Brexit.

According to Mario Sardo, sales executive at QP Savills, who has worked on and off in the Golden Triangle since September 2002, the fact that the Algarve is becoming an increasingly sought-after region is helping to drive and sustain demand.

For QP (Quinta Properties) Savills, around 83% of its buyers were from the UK last year – and UK buyers continue to make up the majority of sales. However, this is diversifying, with the number of French buyers on the up, as well as Belgian, Dutch, German, South African, Indian and American.

In all cases, the tax incentives – including the non-habitual residency (NHR) scheme, which has accounted for 35% of QP Savills' sales – the Algarve’s greater exposure to the global market and the lifestyle on offer to residents is all helping to drive real estate sales in Portugal’s southernmost region.

Another big reason is safety and security, which has become even more important in light of Covid-19. Cases in the Algarve have remained very low throughout the pandemic, with low levels of deaths (42) and confirmed infections (just over 4,600).

Meanwhile, in June, Portugal was voted as the third safest country in the world and the safest in the European Union, according to the Global Peace Index 2020, which was released by the Institute for Economics & Peace.

The country maintained last year’s score amongst 163 independent states and territories, only being beaten to top spot by Iceland and New Zealand, remaining in first and second positions, respectively. In 2014, Portugal ranked only 18th on the Index.

“During Covid, the country has dealt with the pandemic well,” Sardo told PIT. “It’s been very disciplined and has reacted very quickly and consistently across the nation.”

Between 2013 and 2017, Sardo returned to his native South Africa before returning to the Algarve nearly three and a half years ago. He says, even in that time, he has seen a difference in terms of the Algarve’s appeal, stature and influence.

Of the Golden Triangle, he cites Quinta do Lago as the most desirable place on offer. He says it has established itself as one of the leading golf and leisure destinations in Southern Europe, with upgraded golf courses and food and beverage venues.

As well as retirees interested in whiling away their retirement years on some of the world’s finest golf courses, there is an increasing move towards the Golden Triangle becoming a family destination as it offers ‘all-year round living’.

“A lot more Brits are seeing the Algarve as a permanent base, and a family destination, with international schools on offer across the region. The safety and security element, and the general lifestyle, are very appealing,” Sardo adds.

He also points to the lifestyle changes because of Covid, with people downsizing in the city and basing their family in the Algarve instead as the need to be close to the office reduces significantly.

“The world has changed. We can be much more mobile now; people can run their business online,” he argues.

During the height of the first wave of the pandemic, when everyone was in lockdown (from March to June), nothing much happened in terms of activity. The numbers were down, Sardo says, but the conversion rate was up, with more serious buyers at the table.

In just five months, the QP Savills team achieved £100 million in sales. Sardo said virtual viewings helped to support the process, but didn’t necessarily lead to sales, as most people still prefer to experience a property in person.

Once upon a time, the main reason for people investing in the Golden Triangle – and Quinta do Lago and Vale do Lobo in particular – was the excellent golfing facilities on offer. While that’s still the case, it’s no longer the principal reason why people invest or settle down here.

“It’s diversified. It’s no longer just golf – there is The Campus, with any number of state-of-the-art sports facilities. Gyms. Healthy living and wellbeing. It’s moved beyond just golf. There is cycling, yoga, tennis, etc.”

What about Covid and Brexit?

Some British investors may currently be worried, with some justification, about investing in the Golden Triangle, with Covid-19 continuing to put life on hold and the end of the Brexit transition period getting ever closer. What would Sardo say to reassure them?

“Amid coronavirus and Brexit concerns, I believe now is an excellent time to invest for a range of reasons. Firstly, a real estate investment is a tangible investment, another way to maximize the risk-return profile of one’s portfolio and generate an income,” he insists.

“In an economic downturn, a real estate investment is also viewed as a hedge against inflation. So, with limited product available in the Golden Triangle and investor confidence at a 16-year high, why delay investing in one of the most sought-after locations in Southern Europe?”

He points to safety, security, world-class golf courses, long sandy beaches and a broad selection of quality restaurants as the Triangle’s main selling points, as well as some of the most luxurious real estate in Southern Europe, set within the protected Ria Formosa nature reserve.

Access, he argues, is also not an issue. “The area is easily accessible from the airport, which is only 20 minutes away, and Faro airport is accessible from most major European cities in less than three hours.”

He also points to rising property prices as another reason for investors to put aside any doubts and reservations they might have.

“Due to the ever-increasing popularity of the Golden Triangle, developers have continually reinvested in infrastructure and facilities. This has had a positive effect on property prices which continue to show consistent appreciation, and have done so over many years,” Sardo says.

“In addition, there has been a developing trend in recent years from European buyers relocating to the Algarve as it’s a safe environment to live, we have a broad selection of quality international schools and businesses can be run effectively from the sunny shores of the Algarve!”

Algarve investment – why golf resorts are fighting back as residential hotspots ...

For many years, golf has been one of the biggest draws...