On a rainy Thursday at the end of last year – the day of the general election, in fact – Property Investor Today met with Uma Rajah, co-founder and chief executive of prime property lending and investing platform CapitalRise, at the firm’s smart Chelsea offices.

We’d come to find out more about the burgeoning company and the future of the stalling Prime Central London (PCL) market, now around 20% lower than its 2014 peak thanks to stamp duty changes and political uncertainty.

Uma co-founded CapitalRise in 2015 alongside Alex Michelin and Andrew Dunn, themselves the co-founders of well-known design and development firm Finchatton. The two companies are near neighbours, with Finchatton’s offices just a few doors down, and they share some resources and staff. The platform itself launched in 2016.

Uma’s background is actually in the world of FinTech. Having graduated with a Master’s in Engineering from Cambridge University, her early career was with Mars Group, where she spent 10 years in product innovation. She later gained an MBA from INSEAD which helped to foster an entrepreneurial mindset and led to her co-founding her first business, a social purchasing startup. 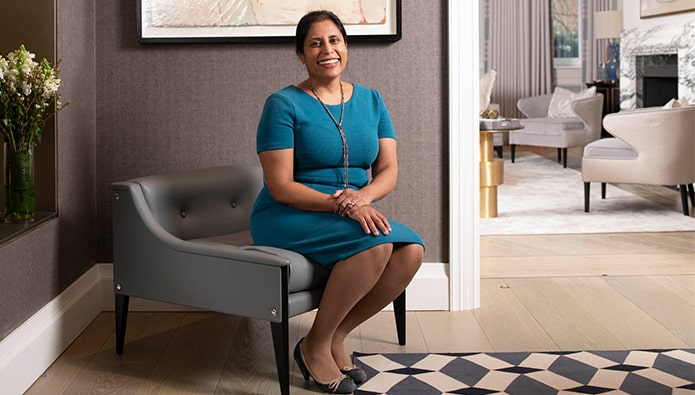 Her FinTech expertise then grew further through various Head of Product roles at consumer lending business Wonga Group. But, four years ago, she decided on a change of course, eager to help bring FinTech innovation to the prime property lending market.

“Property is still such an archaic business and is therefore ripe for disruption,” she says. “There are still incumbents within the industry with a very traditional, old-fashioned approach – not very tech-savvy at all. Something was needed to drive the industry forward.”

She says property lending is, by and large, still living in another age. “Property lending is still where FinTech was in 2010. Back then, the first FinTech lending platform was introduced, and it was all manual, but there has been a huge transformation since.”

She believes the same needs to happen to property lending, and CapitalRise is playing its part in that evolution. It’s an online platform for prime property lending and investing, aiming to disrupt the old way of investing in property ‘to give sophisticated investors and high net worth investors easy and direct access to real estate investments of the finest quality that generate attractive returns’ - earning investors returns of approximately 8% to 12% per year.

“Everything is online, fully automated, and we have our own in-house crowdfunding platform,” Uma says. “Each customer has their own virtual bank account and sort code. All the info is there, online, to give customers as much detail as possible.”

There is no human intervention unless it’s asked for, which many customers appreciate, Uma says – while the platform is designed to ensure that everything is super-slick and highly secure.

“We have in-built data security, regular audits, plus all data is handled in the correct, GDPR-compliant way,” Uma says. 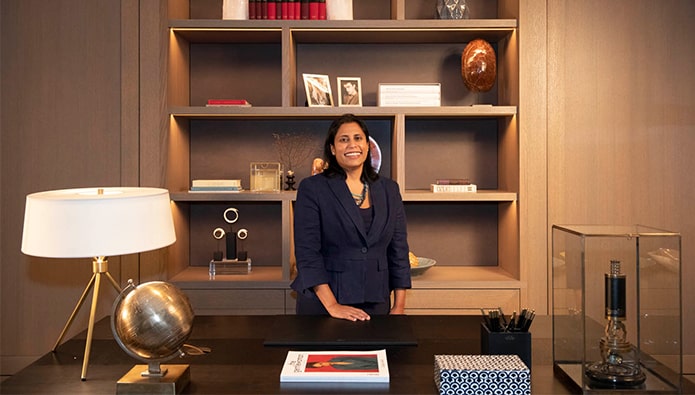 Uma says CapitalRise is very discerning about who it lends to. There is a very comprehensive due diligence process, with any potential member screened thoroughly and needing to meet the qualifying criteria of sophisticated investors and High Net Worth members only.

All property investment opportunities also go through a stringent due diligence process before they make it onto the platform. There is a minimum investment of £1,000, but in many cases it’s much higher than this; for example; up to £400,000 from individuals and several millions for institutions, into individual loans.

The CapitalRise team employ a very prudent, careful, selective and conservative approach. Loans are secured against the underlying asset with a legal charge over the property.

You can find out more about the structure of investments, and how they’re protected, here.

The investment process itself has a number of steps: starting with deal selection, then analysis by CapitalRise’s credit committee, and then onto the underwriting process. After this, if the proposals have passed all these stages, the investment opportunity is posted on CapitalRise’s platform, available exclusively to members. In the deal room, members can review all the relevant documentation and decide whether to invest – and also undertake their own due diligence or seek external investment advice.

Most investment opportunities are based in PCL or Prime Outer London, including prime Home Counties locations such as Winchester and Beaconsfield.

The numbers certainly stack up, with average annual returns of 10% and £16.1 million of invested capital and returns paid to CapitalRise members and institutional funders from 2016 up to September 2019 (by December, when we meet, this number has risen to around £25 million redeemed for investors).

Just as importantly, there have been no defaults or arrears. Nearly £50 million has been lent by CapitalRise against a total property value of £337 million, with an average loan-to-value of 64%.

Because of the values at play, it is typically only institutional investors investing via the platform.

Interestingly, and perhaps uniquely, CapitalRise’s founders invest their own personal funds in every single CapitalRise project to show how much trust they place in it. “We would only be investing in a deal we fundamentally believe in,” Uma says.

While there has been plenty of doom and gloom regarding the PCL sector in recent years, as a result of falling transactions and prices, Uma believes there is plenty to get excited about if you invest in the right projects in the right areas.

“The appetite is still there, but it has to be the right project, the right development,” Uma says.

With the market bottoming out in recent times, there is the argument that the only way is up – and that PCL, like any other market, goes through peaks and troughs. It’s currently in a trough, but this could soon change.

At the same time, Uma believes the lower prices could be appealing to investors, with buy-in costs reduced. Now could actually be the best time to invest, in terms of value for money.

The Conservatives’ thumping win and the subsequent greater clarity over Brexit (barring a radical change of heart from the government, we are highly likely to be leaving the EU on January 31) has given the market confidence, but on the day we met a lot of uncertainty still persisted.

Unsurprisingly, Uma says Brexit and political uncertainty – which has dominated our lives pretty much since the EU referendum was called in early 2016 – has had an impact on the market. She also thinks the proposed additional 3% stamp duty surcharge on non-resident buyers would have a short-term impact if it’s introduced, but believes this would only be short-lived.

“PCL is a unique opportunity,” she explains. “London is a financial and cultural centre, with sensible government and a number of incredibly wealthy people. It trumps Tokyo and New York for overseas investors in terms of being a safe haven.”

She adds: “People will continue to want to acquire. If you compare London to other cities, the overall costs are still very attractive.”

Despite the potential for the introduction of the extra 3% surcharge, the election result should provide the certainty that investors – domestic or overseas – are always craving.

Thanks to the weakness of sterling since the referendum result was announced, overseas investors have been able to cash in on favourable currency conditions. And, while the pound rallied after Boris Johnson’s election win, it’s nowhere near as strong as it was in 2016 – and until the transition period is over and the comprehensive free trade agreement is rubberstamped, currency conditions are likely to remain favourable for overseas investors.

This could be enough to offset any concerns over the double stamp duty they could be charged in future when purchasing UK property.

A few days after the election we spoke again with Uma to get her thoughts on the result and the impact it could have. "Last week’s election result is a welcome one for the prime property market," she said.

"Political uncertainty caused by the general election and Brexit has slowed transactions in the prime property market, specifically in Prime Central London and the Prime Home Counties, where CapitalRise focuses.

The election result is a huge positive step as this political uncertainty has been removed. The Prime Minister now has a clear mandate to reach a conclusion on Brexit. The result means that we will enter the new year and decade with a refreshed confidence and a greater certainty. We expect the prime property market to react very positively as a result."

A gap in the market

Seeking finance post-2008 was very difficult for most people, as understandably lenders both closed ranks and became far more selective about who they lent to in the wake of the global financial crisis – which was in part fuelled by the subprime mortgage crisis in the US and banks and lenders across the globe lending money to people who couldn’t afford to pay it back.

But Uma believes there is a huge gap in the market for development finance, which the established lenders simply can’t fulfil.

“There is a huge gap we can fill to ensure that developers in the prime market get the lending they need, across all sorts of projects.”

Previous investments include properties in Chelsea, Wimbledon, Oxford, Belgravia, Radlett and High Wycombe. To view current live investments, you must sign up to be a member on the CapitalRise site.

With the experienced, knowledgeable and technologically innovative senior team in charge at CapitalRise, there seems every chance this still youthful company will continue to thrive in the decade to come.

Women in Property Investment - a surge in capital investment from women ...

We’re back with another instalment of Women in Property Investment, where...