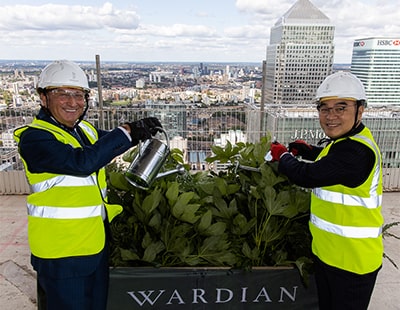 EcoWorld Ballymore – which is responsible for phase 3 of the Embassy Gardens development at Nine Elms – recently celebrated a milestone as their botanical development, Wardian London, officially ‘topped out.’

Adjacent to Canary Wharf and overlooking the South Dock, the 57-storey residential-led development is set to complete in 2020 and is described as a world first in housing design by offering residents access to a ‘green, tranquil escape’ in one of London’s busiest commercial neighbourhoods.

Construction of the project began in 2016, with residents set to move into their new homes from next year. Once complete, the building’s 53rd floor will be home to a sky garden, with the resident gardener, Huw Morgan, in charge of managing the space and tending to the exotic plants and trees.

Wardian London, designed in collaboration with Glenn Howells Architects, will be made up of two residential towers of 55 and 50 storeys, which will contain 766 homes including suites, one and two-bedroom apartments and penthouses.

The towers, home to ‘generous wrap-around balconies’ and apartments with slender profiles, land onto a two-storey podium, which plays host to a grand lobby, pool, restaurant and retail outlets.

Throughout the development, Wardian cases (glass terrariums) can be found filled with exotic trees and plants, many of which are completely new to the UK, with residents openly encouraged to enter and explore the different cases and the plants within.

The plants have matured alongside the project thanks to being procured up to 2 years before installation.

Once moved in, every resident will automatically become a member of The Wardian Club, enabling access to a number of exclusive facilities including a 25m open-air swimming pool, gym, cinema, two restaurants and a rooftop observatory.

Wardian London will aim to create a ‘serene escape from Canary Wharf’s dense, urban environment; integrating indoor and outdoor living, connecting residents with the beauty of nature and bringing botanical beauty to this part of the capital’.

Tan Sri Liew Kee Sin, executive vice-chairman of EcoWorld International, said of the project: “It has been a great pleasure to see the development take shape and become one of the most highly-anticipated housing developments in London, and I am delighted to be able to celebrate its topping-out – a momentous occasion for EcoWorld Ballymore.” 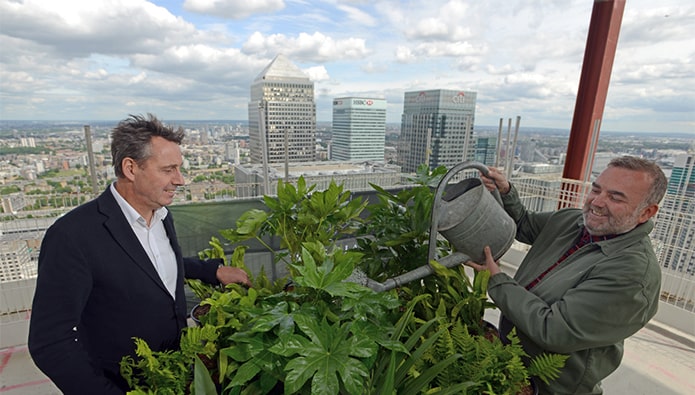 Sean Mulryan, chairman and group chief executive of Ballymore Group, added: “Ballymore have owned the site on which Wardian now stands for 25 years so it brings me great joy to see these two beautiful new towers standing on what has been such an underutilised space for so long.”

He continued: “This is a huge milestone for the development and we cannot wait to see the first units complete and first residents move in early next year. We have worked closely with Glenn Howells Architects to create a building that is beautiful on the inside and out, a sleek, geometric exterior gives way to a luscious, green oasis inside. Moments from urban, commercial Canary Wharf, Wardian creates a place to breathe and we are incredibly proud of what has been achieved.”

EcoWorld Ballymore is a joint venture between EcoWorld Development Group, chaired by Tan Sri Liew Kee Sin, and Ballymore, founded in Dublin by Sean Mulryan in 1982. As well as investment in Wardian London, the joint venture also includes investment in two other important waterside development projects in London, both east and west: Embassy Gardens in Nine Elms and London City Island in Poplar.