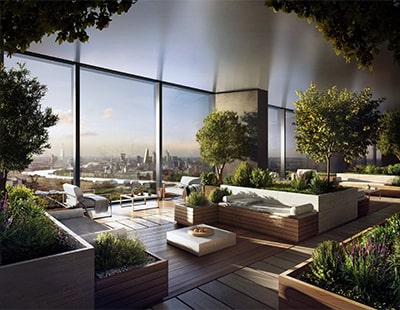 Property Investor Today was recently invited for a tour of the Landmark Pinnacle development in Canary Wharf, the tallest residential tower in the UK, on the day it was topped out.

In a city already full of skyscrapers and iconic tall buildings – from the Shard and The Cheesegrater to the Walkie Talkie tower and the Gherkin – you can now add another name to the list: the Landmark Pinnacle in Canary Wharf, the tallest residential tower in London, the UK and Western Europe.

Once complete, the 75-storey Landmark Pinnacle will include 752 units – made up of suites, one, two and three-bedroom homes and penthouse apartments - with a range of amenities and spectacular views on offer.

It will also form the final part of the Landmark Trilogy which also comprises Landmark West and Landmark East, the flagship development of Chalegrove Properties Limited (CPL). 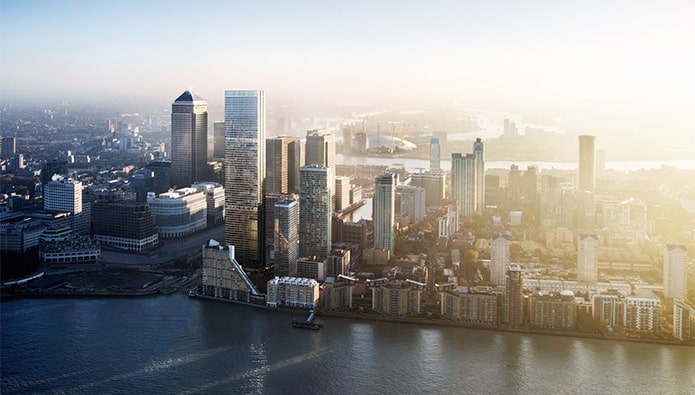 A viewpoint of the whole city

The tour begins at the Landmark Pinnacle marketing suite, where the collected journalists from property, lifestyle and local press publications gather to be shown mock-ups and computer-generated visualisations of how the tower will look once open to residents.

After a short sales pitch of what the tower will look like and mean for the area, the tour of the tower starts in earnest. The Landmark Pinnacle building is still, at present, very much a working construction site, with workers busily going about their usual business throughout the tour.

It’s one of those buildings you have to crane your neck to see the top of, and even in a location famed for its tall, modern skyscrapers the Landmark Pinnacle stands out.

Once we’ve been decked out in our full PPE gear – hi-vis jacket, hardhat, goggles, gloves, protective footwear, the works – we are led to the hoist (usually used to ferry workers and materials up and down the building) and catapulted up the tower, Charlie and the Great Glass Elevator-style, to the 70th floor.

As we motor upwards, Canary Wharf and the ground below steadily gets smaller and smaller and the city of London in all its higgledy-piggledy glory suddenly becomes apparent.

Originally, we were told the wind might prevent us from making it to the very top – the 75th floor, which will house a rooftop garden once construction is complete – but fortunately the weather allows us to steadily make our way up five flights of stairs to reach the peak of what will be the tallest residential tower in the UK.

The views are simply stunning, with vistas of Central London in one direction – the Shard, the Tower of London, the London Eye, St Paul’s, etc. – and East London in the other, with the O2 Arena, the Royal Observatory at Greenwich, the Thames Barrier and, if you squint far enough, the sea all easily visible to the naked eye.

You are almost unfathomably high up, 75 storeys in the sky, but there is a weird sense of calmness and stillness when you reach such a height, so far away from the hustle and bustle of Canary Wharf and the City below.

The rest of the tour involves stop-offs at floor 56 - which will be home to a bar, private dining space complete with service kitchens, a residents’ lounge, a cinema room, a golf simulator and putting green, and two arcade rooms with snooker tables - and floor 27, which will play host to two gardens (one a children’s play garden, the other based on a traditional London garden square). 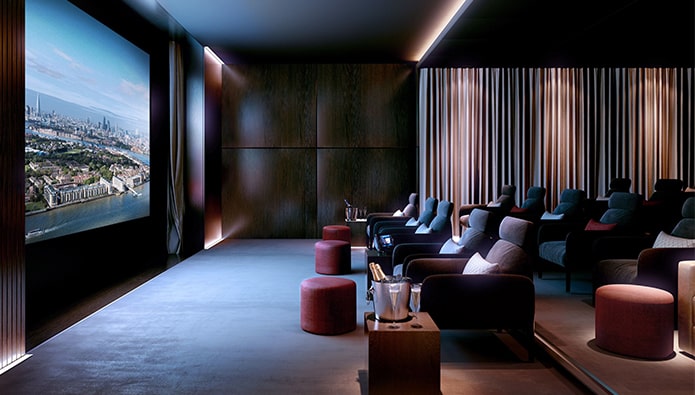 Other amenities on offer will include a media room, a table tennis room, a residents’ gym and studio, a library and meeting rooms, secure underground parking and a 24-hour concierge.

It’s hard to visualise what this will all look like given we are greeted with the mere structure and shell at present, but the mock-ups suggest something luxury, bespoke and high-class, and it’s easy to get a feel for the building’s sheer scale and ambition as you walk through its floors.

Residents are set to start moving in from Q3 2020, with a staggered approach to ensure there isn’t a mad rush as everyone moves in all at once. The building has also effectively been designed in three portions, broken up variously by the gym, the gardens and the various amenities on floor 56, with residences ranging from suites to two-bedroom apartments on levels 11-55 while Pinnacle residences from levels 57-73 range from one to three-bedroom apartments.

Each apartment features a winter garden or amenity area – with sliding doors opening to the elements – while ‘elegant carpeting, timber flooring and bookmatched bathrooms’ are also key features.

Once we’re back on terra firma, we return to the marketing suite to be shown the show apartment and test out the Oculus Rift VR headsets.

First, we road-test the VR headsets, providing the visualisation which was a struggle beforehand. Sitting down on the nearby sofas, we can suddenly see right in front of our eyes what the Landmark Pinnacle will look like when finished. We can move from floor to floor, use the treadmill in the gym, see the gardens, watch a mini-film on the construction of Landmark Pinnacle in the cinema, and get a clear idea of what the private dining and bar spaces will look like.

It takes a while to get used to, but once you have it becomes a very immersive, absorbing experience – and is surely the way many of us will view potential homes in the future?

Having had too much fun with the VR headsets, and far too many of the free biscuits on offer, we are taken to see the show apartment, where one of the sales agents (homes are being sold by both JLL and Knight Frank) talks us through what the average apartment offers – fully fitted kitchens, high spec designs, wood flooring, a pets allowed policy – and how these homes are going to be for people to actually live in rather than being a liquid asset or a rich person’s plaything.

The tour is capped off with drinks and canapes at the nearby Novotel hotel, where excellent views of the building we’ve just traversed are on offer. 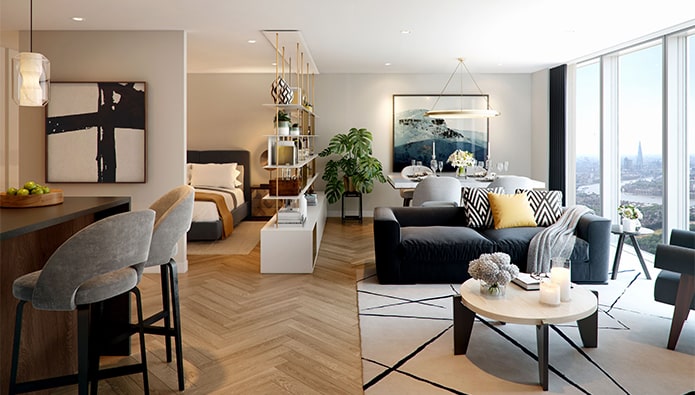 What does it cost to live there?

Asking prices for a studio flat start at around £553,000, going up to around £1.5 million for a three-bedroom apartment and £4 million for a penthouse. Many of the more than 70% of apartments already sold were purchased off-plan, with a 5% sign-up fee, and then a further 5% fee every six months up to 20% of the overall price. Buyers then need to pay the remaining 80% when they receive the keys.

CPL also recently announced the launch of ‘The Loft Collection’, which offers free upgrades to its initial offering on studio apartments for future and existing buyers.

The upgrade means buyers of a studio get a space with the function, look and feel of a one-bedroom apartment. Available in three different layout types, the apartments are spaced across levels 11 to 64, with prices starting from only £480,000.

Rami Atallah, project coordinator at CPL, said: “The Loft Collection is a premium upgrade to our studio offering, providing sophisticated living spaces for those looking for a prime apartment in London’s ever-growing financial district. With the new partitions and layouts we’re ultimately offering a one-bedroom apartment for the price of a studio, which will be hard to find anywhere else in London.”

Canary Wharf, given its location further east and the fact it’s never really joined the prime London elite, is generally more affordable than other high-profile parts of the capital despite being one of the world’s major financial hubs – as well as, increasingly, a major retail, foodie and entertainment space in its own right.

The Landmark Pinnacle, arguably more than any other building in the area, currently holds a huge USP for investors, but with the way London and the world is going you wouldn’t bet against it being the tallest building for long.