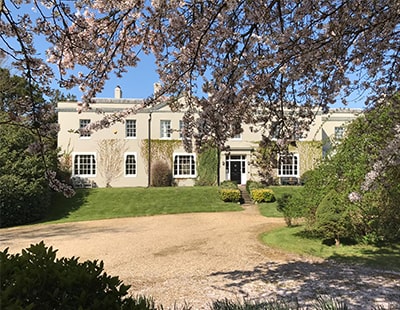 Located just 14 miles from central London, the six-bedroom house boasts a cinema room, home gym, state-of-the-art kitchen, wine room and four acres of mature grounds, featuring a half acre lake. There is also a separate three-bedroom cottage in a private walled garden, ideal for letting out or for use as a home office.

The home is just a stone’s throw from Hadley Wood, where superstar football players, actors and the likes of Zayn Malik and Emma Bunton are known to reside, while Amy Winehouse also lived there before she passed away.

What’s more, the house featured regularly as the original Chuckle Manor in the 90s – the set for TV hit ChuckleVision with the Chuckle Brothers - and was the backdrop for the 1999 TV adaptation of Great Expectations, of which owner Melanie Walsh’s son was an extra.

The estate dates back to 1500, when the land originally housed a manor that Elizabeth I is rumoured to have stayed in. The current structure was built around 1760 as a folly – a decorative structure that rich people in the 18th century liked to build on their land for fun – before eventually being extended and transformed into a habitable home in the 19th century.

Amidst Brexit and the subsequent uncertainty in the UK housing market, many homeowners are resorting to more inventive methods to sell their property. Hence an emerging trend of raffling family homes, which presents consumers with opportunities to own their dream house for the price of a cinema ticket. This is what Melanie and Nigel Walsh of Barnet, north London, have opted to do.

“Due to Brexit and the house market being in the doldrums, we realised that we needed to be creative if we were to sell our wonderful family home of 20 years,” they commented.

“The house was just a shell when we purchased it back in 1991, and we have given it every bit of our love and attention over the past decades. Our three sons have grown up here, and one was married on the grounds a few years ago.”

The impressive Grade II listed mansion is completely tax free and has excellent road connections to three major airports as well as being 2 miles away from the A1 and M25. It has previously been listed on Rightmove for £6,250,000.

Eager buyers can enter the competition by visiting the Dancers Hill House website. The competition is open to people all over the world and can be paid by bitcoin.

How is the coronavirus affecting British buyers and sellers in Spain? ...

Demand from prospective buyers and supply of available homes both fell...