The current uncertainty being caused by Brexit has had a clear impact on the number of Chinese residential acquisitions in the UK, according to Juwai.com.

“Chinese demand dropped from the third quarter going into the fourth quarter of 2018,” Carrie Law, chief executive and director of Juwai.com, said. “It looks like it will drop again in the first quarter of 2019, once all the data is in.”

She added: “Chinese buyers are still very much interested in UK property, but their enthusiasm seems to be waning by the quarter. The reality that Brexit is messier than expected is causing some buyers to hold back.”

Ironically, a hard Brexit – now far more unlikely after recent government votes to rule out no-deal and inch towards a softer version of Brexit - could result in more Chinese buying due to the likely weakening of the pound a clean break from the EU would cause.

“A hard Brexit is intended to enable the UK to go it alone, but ironically the cheap currency could result in more Chinese property acquisitions,” Law said. 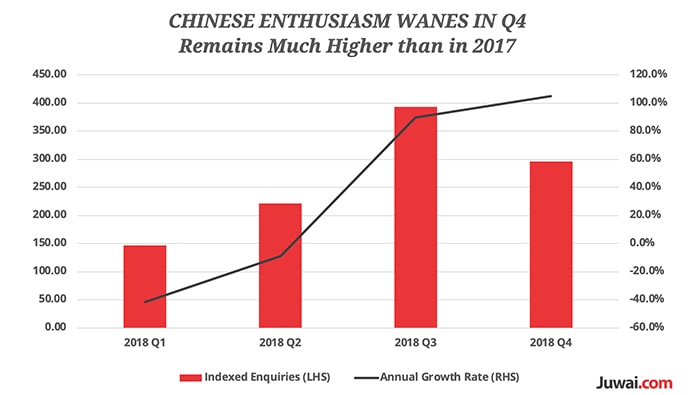 “Chinese buyers are very sensitive to relative currency movements. The post Brexit referendum boom in Chinese buying was largely driven by the suddenly weak pound. Today, however, a discount on sterling of about 10% is already factored into buyer assumptions. The pound sterling would have to fall further to bring new Chinese buyers into the market.”

Despite the ongoing Brexit uncertainty – which is only likely to continue despite the UK and the EU agreeing to a Brexit extension to October 31 2019 - most Chinese buyers still believe the long-term prospects of the London property market are good, according to Law.

London has reacted well to short-term shocks in the past and, Law said, 'has always returned to its role as a leading capital of the world and a destination for residential investment in middle-market and premium residential property'.

“Brexit may or may not cause short-term shocks, but our buyers expect the ship to right itself in due course,” Law continued.

The three primary drivers behind continued Chinese demand are the weak pound, the UK's world-class education system and the country's long-term prospects even in spite of Brexit.

“Our buyers in the UK today are nearly evenly split between purchasing for their own use and for investment,” Law concluded. “The weak pound, education, and the power of the British brand are the three primary drivers behind Chinese residential property acquisitions.”

Allsop Residential Auctions defied all the odds in 2017 ...

Allsop Residential Auctions has taken a look back on a successful...

How is the coronavirus affecting British buyers and sellers in Spain? ...