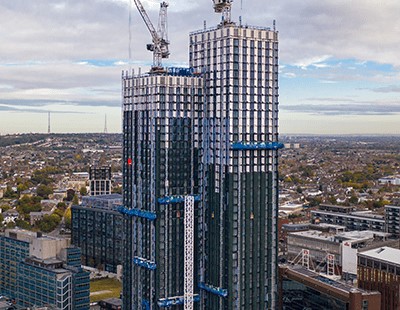 Croydon, a part of South London which has given birth to world-famous models, musicians and artists including Kate Moss, Stormzy and Tracey Emin, is now almost home to the tallest modular building on the planet as a significant Build to Rent scheme nears completion.

Tide Construction, the UK-based developer constructing the project on behalf of Henderson Park and Greystar, last week craned into place the last of 1,526 modules which have been assembled on site in Croydon to create two towers measuring 44 storeys and 38 storeys respectively, only 35 weeks after the first module was installed.

The 136 metres development – which makes it as tall as the London Eye – is set to house 546 Build to Rent apartments that will be managed by Greystar, an American development and property management company which has a considerable stake in the UK’s growing Build to Rent sector.

By manufacturing the buildings inside a controlled factory environment, Tide and Vision Modular Systems (Tide’s off-site manufacturing company) will be able to complete the project in just over two years – around half the time it would have taken using traditional methods of construction.

Vision Modular Systems’ factory, in Bedford, manufactures apartments on a production line, assembling fully completed modules in a similar way to how cars are created. The modules are fully completed internally, including kitchens and bathrooms, and then transported to site, speeding up the construction process.

Tide says that all of the apartments that roll off the production line are fully certified and accredited, backed by the UK’s leading certification bodies to ensure that every home is ‘fundable, mortgageable and insurable’.

The announcement of the Croydon scheme comes a couple of weeks after housing minister Esther McVey told delegates at property conference MIPIM UK that Britain needed to ‘become the world leader in modular housing within the next 10 years.”

Tide, though, believes that the UK already has plenty to be proud of when it comes to modular housing, with the country now being home to three of the world’s tallest modular buildings.

What are the benefits of modular housing?

According to Tide, modular housing offers a number of major advantages over more traditional methods of construction. These include:

Speed – homes can be completed in half the time and arrive on site 95% complete with pre-installed kitchen, bathrooms, plumbing and wiring. At the Croydon development, following the installation of modules, it took fifty workers just a week on each of the towers’ levels to complete finishing touches such as floor fitting and painting.

Christy Hayes, chief executive of Tide Construction, which currently has over 1,800 residential homes under construction across the Greater London area, as well as over 5,000 student accommodation units, added. “Construction of the towers began in February 2018 after planning consent was gained back in November 2017. From there, the 1,526 modules were stacked on top of a concrete podium linking both towers at ground floor level. Once the concrete cores of the two towers were complete, Vision Modular Systems’ pre-fitted, pre-plumbed and pre-wired modules began arriving on site.”

“We successfully installed the last module in just 35 weeks - 3 weeks ahead of an already tight schedule - after the first was craned into place.

Councillor Paul Scott, Croydon Council’s cabinet lead for planning and regeneration, said this project is just the latest part of Croydon’s transformation, with the town becoming a tech and cultural hub thanks to a thriving start-up sector and leisure venues such as Boxpark and Fairfield Halls.

“We’re delighted to be a global leader in modular housing and are incredibly proud to have supported Tide Construction deliver this record-breaking and award-winning development in under two years,” Scott commented.

Mark Allnutt, senior managing director at Greystar Europe, also added his delight at the ‘quality and remarkable pace of delivery’ of 101 George Street. He said Croydon is emerging as an ‘economically-vibrant and culturally dynamic centre’ which is going to need high-quality rental homes to ‘support this stellar growth’.

“101 George Street, as well as claiming the title ‘tallest modular tower in the world’, will set a new standard for rental accommodation in south London, with fantastic facilities for residents as well as civic space for the local community,” he claimed.

Meanwhile, Simon Bayliss, managing partner at HTA Design LLP – which designed the apartments – said what his company and Tide have achieved at 101 George Street is a perfect example of what modular construction can do ‘to deliver housing at speed, without compromising on architectural quality’.

Bayliss believes modular housing is set to play a major part in addressing the UK’s housing shortfall, but that this can’t be achieved without a concerted effort to reform the planning system. “The current planning process doesn’t provide the certainty and stability required to scale up modular construction,” he said. “If we are to take the industry into a new age of digitisation and innovation, central and local government must bring planning into the 21st century.”

We recently asked whether modular housing is the solution to the worldwide housing crisis, and also covered the £101 million tie-up between Greystar and Henderson Park for a site in Nine Elms.

Off-site construction specialist Premier Modular has been awarded a place on the...