UK city house price growth has picked up by 2.9%, underpinned by a 1% increase in London house prices, according to Zoopla’s October UK Cities House Price Index.

London leads the bounce back

Cities in southern England recorded firmer pricing, particularly in the London city index, where prices have increased 1% in the past year – the highest rate of growth for two years.

The shift in London house price momentum is down to constricting supply – a trend that has been developing for the last 12 months and has even accelerated by the announcement of the election on December 12.

Zoopla’s data also shows a notable increase in the number of sales agreed per agency branch, which indicates that there is renewed demand for housing in London after a sizable drop in sales volumes over the last three years.

In early 2016, when demand started to weaken, the market grappled with a 20% gap between the price of new listings coming to the market for sale and the price of property being marked as sold on Zoopla. This gap has steadily closed over the last four years to a sustainable level of 5%.

To put this into perspective, house price growth since the start of 2017 has exceeded 15% across Edinburgh, Leicester, Manchester and Birmingham, but the pace of growth is slowing.

All the cities covered by the index are registering price growth of less than 5% per annum – the first-time growth across all cities has witnessed this since November 2012.

North of the border, house price growth remains steady in Edinburgh and Glasgow at 4.0% and 2.6% respectively.

However, the index marks the four-year anniversary of consecutive year-on-year house price falls in Aberdeen, caused by the collapse in the oil price in 2015.

“After a three-year repricing process accompanied by a sizable decline in housing sales, the London housing market is finally showing signs of life,” Richard Donnell, research and insight director at Zoopla, comments.

He says the shift in momentum is clear, which bodes well for higher sales activity in 2020, rather than an uptick in house price growth.

“While the London housing market has been in the doldrums, market conditions in regional cities have been stronger over the last two years with demand supported by employment growth and attractive housing affordability. The rate of growth is slowing, and all cities are registering annual growth of less than 5%.”

He adds: “The announcement of the General Election has brought forward the usual seasonal slowdown, but the last few weeks of the year pre-Christmas tend to be much quieter than after Boxing Day, when consumer interest in housing springs back to life.”

The graph below shows the cummulative city house price inflation from 2017: 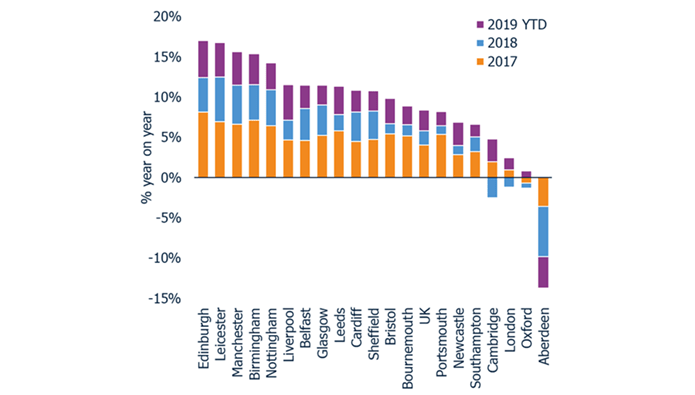 House price growth across UK cities reduced steadily throughout 2018, according...