A nearly 200-year old building in Stourbridge is set to be transformed into modern apartments after a property developer won planning approval from Dudley Metropolitan Borough Council.

Claremont Property Group, which was also behind the multi-million pound residential conversion of Stourbridge’s Grade II-listed Carnegie library, is set to convert another of the town’s historic buildings into modern apartments.

Planning permission has been received for full residential conversion of the The Bell Hotel, on the corner of Bell Street and Market Street, which was originally built almost 200 years ago.

The project is set to deliver 14 studio, one and two-bed apartments, including car parking and additional amenities, at the vacant three-storey Georgian property next to St Thomas’s Church. 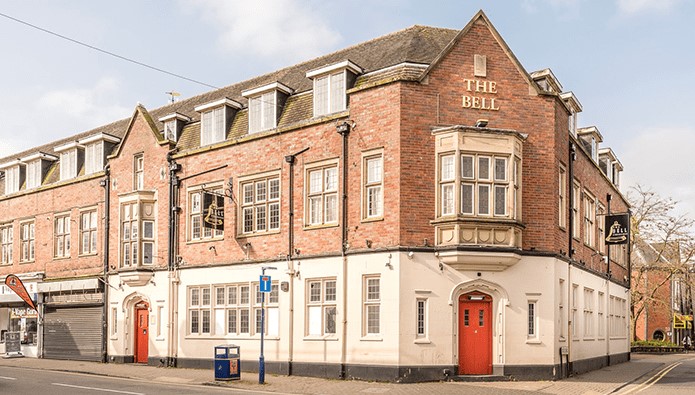 “We are very pleased to be given the opportunity to bring another important Stourbridge landmark back into use,” Andy Robinson, business development manager at Claremont Property Group, said.

“This project will breathe new life into The Bell and give homeowners the chance to purchase high-quality, modern living in a way that celebrates the character and traditional features of an historic building.

Robinson said Claremont were one of the first developers to see the residential potential in Stourbridge for first-time buyers, professionals on the move and those looking to downsize.

“Although we could have embarked upon a more typical residential development, we wanted to build on the success of The Old Library in the town centre, which provides homeowners with a completely unique experience,” he added. “It has been incredibly popular for those taking their first steps on the property ladder through Help to Buy. We believe there is a clear local demand for purchasing a slice of history.”

Originally built in 1820, the Old Bell operated as a coaching inn before becoming a family commercial hotel and posting house with corn exchange vaults.

The venue, which hosted the ‘President’s Annual Spread’ attended by many of Stourbridge’s leading tradesmen, contained a billiards room with two tables supplied by Burroughes and Watts, an external yard and stables, and its own bowling green garden, once described as the ‘finest in the country’ – which had become the pub’s car park by 1965.

Most recently the premises functioned as a nightclub and public house.

The Bell, which is located in the heart of Stourbridge town centre, is approximately 15 miles to the west of Birmingham and 12 miles to the south of Wolverhampton.

The building is located just a few minutes’ walk from a range of shops and services, including nearby Stourbridge Town station, with connections to Stourbridge Junction – which in turn offers good links to Birmingham and Kidderminster.

Claremont Property Group, founded by Manjit Deol and his sister Perm Saini in 1999, has fast been developing a reputation for repurposing and carefully restoring the original features of historic building stock into exciting contemporary living spaces.

The property investor and developer completed work on the two-year conversion of The Old Library in Hagley Road in July 2019 and has ambitious proposals for the multi-million-pound residential conversion of an historic former ‘flatted factory’ in Birmingham city centre.

Claremont Property Group has been granted approval for the regeneration of...

The number of agricultural to residential conversions in the UK has...