Estate agent Aston Chase has revealed that it has achieved more than £25 million worth of sales to Hong Kong buyers thanks to the recent sale of 92 Portland Place in Regent’s Park.

The sale of 92 Portland Place marks the fifth transaction in recent months to a Hong Kong national, with the three-bedroom maisonette sold for £4.4 million to a Hong Kong couple in their fifties with two children.

In the case above, the apartment offered interior design by internationally-acclaimed design firm Taylor Howes and also provides access to eight-acre private gardens including a lawn tennis court and children’s play area.

In recent times, Aston Chase has also sold a £1.85 million apartment at the Plimsoll Building in King’s Cross to a couple from Hong Kong with a son who will be studying in London.

The sales at 92 Portland Place and the Plimsoll Building follow a deal at 10 Whitehall Place at the Corinthia Hotel in September of this year to a couple from Hong Kong. The £10.75 million, four-bedroom apartment sold within 72 hours and marked the highest Whitehall transaction in five years.

Simon Deen, director of new homes at Aston Chase, said: “Aston Chase have secured a number of significant deals in recent months to Hong Kong buyers. We have seen a surge in interest due to political unrest in the region with many Hong Kong nationals seeking to diversify out of Hong Kong and provide a safe haven for both themselves and their money. Interestingly, our clientele are looking for turn-key properties within areas that offer exceptional amenities for themselves and their families.”

In July this year, we explored how Hong Kong residents were flocking to buy in London amid political and civil unrest in their home country. This unrest shows no signs of disappearing anytime soon, with anti-government protests and nightly battles between activists and police now a part of daily life.

While this remains the case, there is likely to be continued high demand from Hong Kong buyers seeking a safe haven.

Cambridge Military Hospital gets a makeover

In other development news, Weston Homes says it has started the £60 million, three-year redevelopment programme at Cambridge Military Hospital, with the conversion of the 12-acre (4.9 hectare) Grade II-listed site in Aldershot into new homes.

VKE Contractors Limited have been appointed by Weston to undertake the substantial groundworks, while restoration specialist SJB will be responsible for the delicate stripping out of the internals of the buildings. Weston Group’s own in-house construction division will be the main surveyor and contractor on the project.

Weston Logistics, a division of Weston Group, will be in charge of handling the scheme’s supply chain management, plant hire and the provision of off-site construction products and services.

The main hospital was originally built in the 1870s and based on design principles outlined by Florence Nightingale. It opened on July 18 1879, named after HRH Prince George, Duke of Cambridge and cousin of Queen Victoria.

Injured soldiers from Britain’s key 20th century conflicts were nursed back to health in the hospital’s wards, including troops from the Boer War, the Battle of the Somme, the D-Day landings and the first Gulf War in 1990-1991.

The hospital was subsequently closed in 1996 and in 2001 the Ministry of Defence (MoD) announced the buildings were surplus to requirements. Weston acquired the Cambridge Military Hospital in 2019 from the MoD and partner Grainger plc, and soon put together a masterplan devised by architectural practice Adam Urbanism.

Once complete, Cambridge Military Hospital will provide one, two and three-bedroom apartments and two, three and four-bedroom houses set in landscaped grounds. The main building will be converted to provide 74 homes (including apartments and houses), commercial/community facilities and grand communal foyers and spaces.

The construction will see the reintroduction of the original elevations which will be enhanced with refurbished and new balconies, while between the building’s pavilion wings private gardens and parking for residents will be created.

Inside, the spacious rooms, high ceilings (up to 15.5 ft high) and original features such as fireplaces, panelling and staircases will be retained and incorporated into the new homes.

Meanwhile, the other historic hospital buildings will be converted to provide two and three-bedroom apartments, alongside newly-built apartments and houses.

Around these restored heritage buildings there will be semi-private gardens and courtyards, open lawns and tree planting.

Aldershot, a popular London commuter town just 33 miles southwest of the capital and only 43 minutes by train to Waterloo, is often hailed as the “Home of the British Army” thanks to its long association with the armed forces. 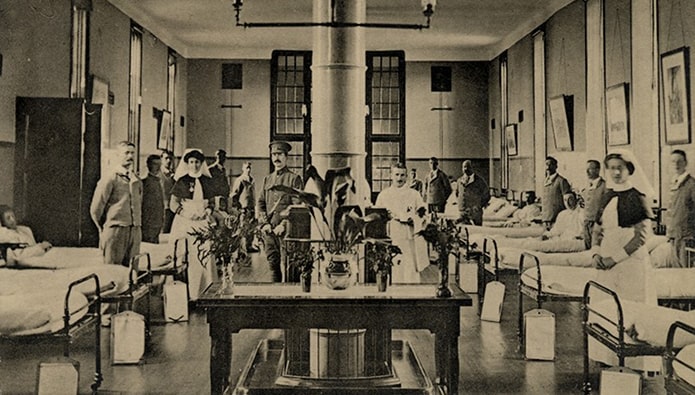 In 1854, as the Crimean War was raging, Aldershot Garrison was established as the first permanent training camp for the British Army, drastically increasing its population and cementing its transformation from a small village into a key army town.

It played a key role in both World Wars, too. Aldershot had the largest army camp in the country (with 20% of the British Army being based in and around the town) at the start of World War One. In the 1939-1945 conflict, around 330,000 Canadian troops of the 1st, 2nd and 3rd Canadian Infantry Brigades passed through Aldershot for training.

Bob Weston, chairman and chief executive of Weston Homes, said: “Weston Homes has started construction work on the conversion of the Cambridge Military Hospital into a new residential address for Aldershot. The three-year conversion project will bring a new lease of life to these heritage buildings. We will transform them into modern homes layered with the rich history and unique character of this historic site.”

Hong Kong residents flock to buy in London amid political and civil unrest ...

There has been a surge in the number of Hong Kong...

A luxury London estate and lettings agency says it is concerned...