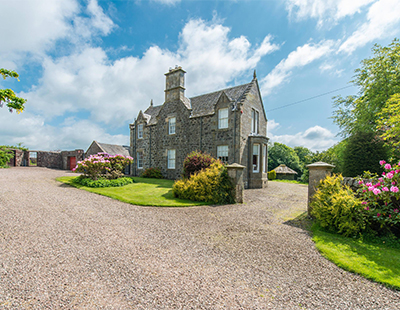 A farmhouse in Sherborne, Dorset, is set to go under the hammer for the first time since its construction in 1617 at Symonds & Sampson’s next sale.

Sherborn Castle was built in 1594 by landed gentleman, writer, politician and spy, Sir Walter Raleigh, who owned it before he was arrested for treason. He was eventually pardoned but had to give up his castles and estates to the Crown.

While most people visit the estate to walk around the attractive gardens and lake at Sherborne Castle – also previously owned by Sir John Digby – for a small fee, attention has been brought to the farmhouse nestled in the land.

The estate at Sherborne has remained intact but auction goers will have a rare opportunity to buy Elm Tree Farmhouse on land that would have formed part of the original purchase when it goes under the hammer at Symonds & Sampson’s sale on September 21.

Elm Tree Farmhouse is guided at £575,000; three acres of gardens, grounds and paddock are included with the house together with a courtyard with further potential.

“It is a very special property and stands very well and will benefit from some updating and modernisation but has terrific potential,” Mark Lewis, auctioneer at Symonds & Sampton, said.

The property has room to extend at the back and the adjoining barns have potential to incorporate into the main dwelling. Listed building consent will be required but a clever reconfiguration of the accommodation would be exciting.