Barking has been revealed as the best place to invest in by London estate agents Portico.

The agency, which can trace its history back to 1818, produced a rental yield Tube Map, which found that the East London town was the best location for landlords and investors looking for solid returns.

The map analysed the top eight areas for rental yields in London. Below, Property Investor Today takes a quick look at where these were.

The popular zone 4 hub is one of the most affordable locations in London, but also offers fast and easy transport links to more central areas. It has two Tube lines and easy access to the motorway for those looking to escape London life. The average property price is £254,943, up by 26% since 2015.

Slightly closer to the capital than its near neighbour Barking, East Ham is another popular commuter hub which is expected to experience significant regeneration in the coming years. As a result of the recent closure of West Ham United's ground, which was based in East Ham, a number of new property developments have sprung up in recent times.

Strong transport links make it an ideal location for London workers, while the average property price is £383,469, up by 4% on last year.

The most central high-yield location in Portico's research, the area is best known for the beautiful 57-acre royal park that gives it its name. An exclusive, high-end part of town – reflected in an average flat price of more than £1.5 million, up by 3% on last year – it is a short walk from Victoria, which provides great transport links to southern England.

A highly sought-after location, it has easy access to Oxford Street and Mayfair, as well as a wide number of cafes, independent shops and restaurants.

Found on the Central Line, a couple of stops from Stratford, Newbury Park is less than half an hour from Central London and is a popular location among commuters and young families, as well as being a property investment hotspot.

Another East London location, Plaistow sits on the District and Hammersmith & City lines and is particularly popular among renters, who enjoy the slightly cheaper rents compared to nearby areas such as Bow Road and the close proximity to Central London. It also offers easy access to other areas in East London.

Sitting just north of Leyton and Walthamstow, Redbridge benefits from an ideal location and its position on the Central Line, which provides easy and quick access to the rest of London as well as Westfield shopping centre at Stratford.

Yields in the surrounding area of one of the world's busiest and best-known airports are strong, thanks to consistently high demand, especially from renters who work at Heathrow's various terminals.

It also offers an ideal location for international business travellers and frequent flyers, as well as providing fast access to Central London via the Piccadilly Line and the Heathrow Express.

The final area to make up the top 8, North Wembley is home to Wembley Arena and Wembley Stadium. The area surrounding Wembley Central station has undergone significant regeneration in recent years, with new apartments and flats and the arrival of London Designer Outlet in October 2013, home to many shops, restaurants and entertainment venues.

It offers easy access into London from Wembley Central via the Jubilee and Metropolitan lines, as well as good road access out of the capital via the M25. Its new property developments, ongoing regeneration, strong transport links and handy location make it a sought-after area for tenants.

The Tube map of rental yields is shown below. 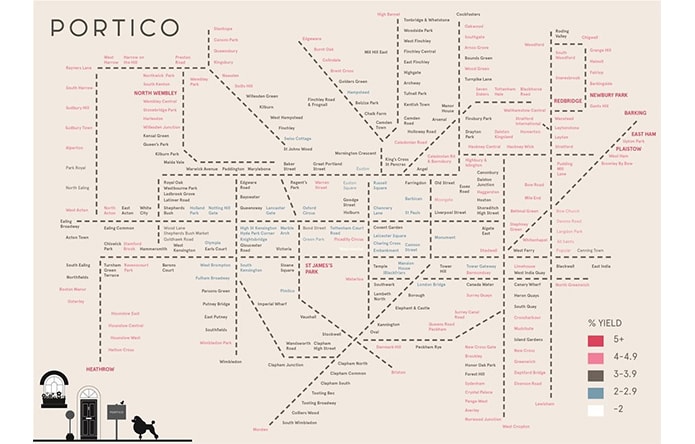 Location has been named as the top characteristic that makes Brits...