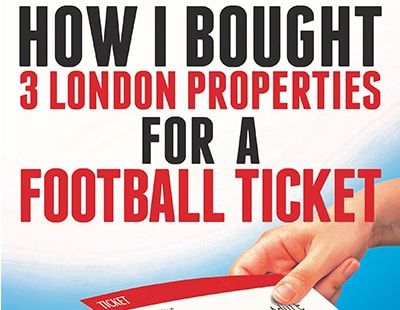 When I moved to London in winter 1997, I was determined to make my fortune. I didn’t know it at the time, but property was going to help me succeed.

At the very beginning, even having a place to live seemed a distant daydream. I didn’t have any money, any qualifications or any business experience to speak of. I didn’t have a flat and I didn’t have a job. All I had was my old Ford Fiesta, which became my home for six months.

I fell into the vicious cycle familiar to many homeless people – without a home, I couldn’t get a job; without a job, I couldn’t get an address. But I never stopped trying. One day, finally, my luck changed. A kind landlord took a chance on me and within days of moving in I had three jobs. Over the next few years I experienced mixed levels of success in jobs as a retail assistant, tour guide, steward for Arsenal and with my own nightclub promotions business.

In my spare time, I engrossed myself in business books. I couldn’t afford to buy anything. So after work I would sit in the bookshop, reading as much as possible until they closed up for the night. Then I would come back day after day to finish the book. I was determined that whatever I did, I would do it as well as possible.

Make your dreams a reality

As a child, my favourite board game was Monopoly. I saw property value going up year on year in London. But without a deposit or any possibility of a mortgage, it wasn’t easy to get on the property ladder. When I proposed deals to property owners, it wasn’t surprising when they turned me down.

I kept trying, and was able to make my dreams become reality.

When you want to get to know someone, or do business with someone, I have found that by giving them something they want for free, they will feel the need to return the favour.

Through persistence, determination and some knowledge of the individual I was doing business with, I was able to buy three London properties for a football ticket!

Helping others is helping yourself

Does the seller value speed? Do they have a difficult tenant? Is there an outstanding loan they are struggling to pay? If they have a problem, chances are you can help them. If you go into a deal with the attitude that you can create a win-win situation, then everybody stands to come out on top.

One of my earliest clients was a property owner who was losing money hand over fist. The bank was about to foreclose on the mortgage; he had debts he couldn’t pay and a tenant refusing to pay rent. He’d been trying to sell, was utterly fed up and couldn’t be bothered with the hassle. My solution was simple: turn the apartments into holiday lets and serviced apartments. This doubled, even tripled, the income of the property and prevented any further eviction nightmares. I increased my income, minimised risk and helped the seller get the price they wanted!

My ticket to property

I met a guy who had three properties in East London that had been on the market for over a year. He wanted £100,000 over market value. Unsurprisingly, he had been unable to sell them.

I offered the full asking price. All he had to do was let me come up with a solution to give him exactly what he wanted. My offer was very straightforward: I would ‘babysit’ his mortgage payments for him, paying them every month on all three properties. I had no money, so I explained that I would need a few years to be able to complete the purchase. He told me that he wasn’t interested.

The next month, I called him back to see if he had been able to sell his property. He hadn’t, so I told him that my offer still stood. Once again, he declined, telling me that he wanted a cash buyer. Three months in, I called again and got the same answer. I did the same thing the next month, and the month after that.

The sixth month, I called early in the week and asked about his weekend. He told me it was fine, but he was disappointed that Arsenal had lost. We got talking. I told him I would buy a ticket to go and see Arsenal at any game of his choice if he went ahead with my proposition. The response was “That sounds great. Where do I sign?”

*Laurence Lameche is an entrepreneur and author of new book, How I Bought 3 London Properties for a Football Ticket.

Coronavirus crisis – how is the property investment market coping? ...

The coronavirus crisis has affected the property investment market in many ways,...

Property investors are becoming increasingly interested in expanding their portfolios outside...

Portfolio landlords burying their heads in the sand over tax changes, says expert ...

A self-employed mortgage expert has claimed that Britain’s portfolio landlords are...