Manchester, a city of football, music, innovation and culture which has reinvented itself in recent years to escape its post-industrial decline, has increasingly been a hotspot for property investors in recent years, driven by affordable property prices and strong rental yields.

It is an attractive city to both domestic investors – it performed strongly, for example, in LendInvest’s latest Buy-to-Let Index report – and those from overseas. Now new research from Select Property Group has revealed that residential property price growth and rental yields are both on the up in Manchester.

The city’s residential property price growth – powered by substantial public and private investment, an ongoing shortage of housing supply, a large student population and the return of city centre living - has outperformed the UK average. Annual average growth stands at 4.2%, compared with a UK average of 2.4%.

Rental yields, meanwhile, are expected to rise by 3.5% between now and 2020, according to property specialist JLL. The firm rates Manchester as the number one prospect for residential price growth over the next five years.

Strong demand for homes is helping to drive this growth, with research earlier this year from Hamptons revealing that the number of people swapping London for northern cities has tripled since 2010.

Manchester, more than most, has benefited from businesses and corporations – including the BBC – moving their operations from the capital in the last decade or so. The rising employment opportunities, continued regeneration and strong growth of the city’s tech, digital and media sector have all upped demand for property in the city, both to rent and to buy.

Manchester’s strong growth and attractive rental yields come in spite of the uncertainty being caused by Brexit. On Monday, Theresa May announced the postponement of the planned vote on her Brexit deal and has now headed to meet European leaders and EU officials to try and rescue her plan.

Negotiations between the UK and the EU remain fractious, but several trends shaping Manchester’s fortunes are in some ways independent of Brexit. A young and well-educated population, alongside the new mayor of Manchester (Andy Burnham) and the government’s much-talked about desire to build a ‘northern powerhouse’, are helping to create the right environment for an economic boom.

Manchester is also at the heart of the graphene industry – a revolutionary 2D material first isolated at the University of Manchester, which recently opened the £60 million Graphene Engineering Innovation Centre on campus – and is attracting significant business investment from numerous high-tech, high-skill industries.

What’s more, Select Property Group argues that London – traditionally the go-to destination for international investors seeking a slice of the UK property market – is hugely saturated. Consequently, property prices in the capital are continuing to decline, while cities across the rest of the UK are experiencing a price boom.

The evidence also suggests that, while UK residents seem uneasy about the ongoing Brexit negotiations - with just 3% of respondents to a recent survey from IP Global saying they plan to invest in the domestic residential property market over the next year, down from 4% 12 months ago - the same is not the case for overseas investors. In the same survey, some 19% of those surveyed from Hong Kong said they would consider investing in UK property, a figure which rises to 20% for those from the United Arab Emirates and 45% for investors from South Africa.

Select Property Group’s latest project is an example of Manchester’s property investment potential. The Elizabeth Tower at Crown Street – found in the city’s popular Deansgate district – will be one of the UK’s tallest residential towers once complete. As well as apartments (175 of which have already been sold since launch on October 15), the tower will also play host to luxury retail venues, a roof terrace, royal garden and - at 44 storeys up - one of Europe’s highest swimming pools. 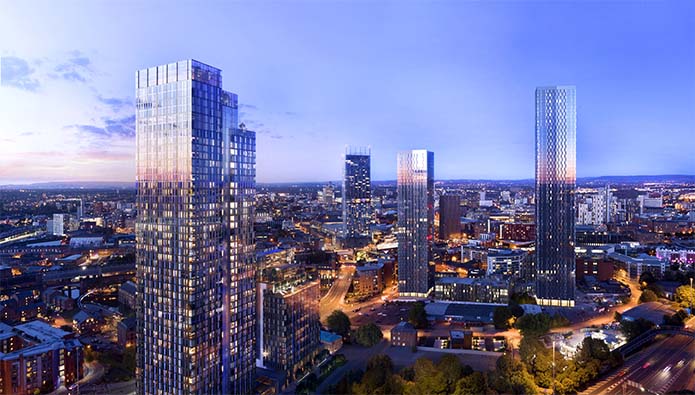 “The change Manchester has seen in recent years continues to amaze, and Elizabeth Tower at Crown Street is a symbol of that change,” Adam Price, managing director of Select Property Group, said.

“With the city’s rich musical, cultural and sporting heritage, emerging industries such as graphene, and with Greater Manchester hosting the headquarters of world-class companies including Adidas UK, Essar Oil and JD Sports, we are unsurprised to have seen many of the apartments available be bought off plan,” he added. “With a projected rental yield of 7%, combined with 20% capital growth, Manchester is a better bet for investors than other asset classes.”

He said Elizabeth Tower at Crown Street will be a new icon for the Manchester skyline, and ‘an iconic addition to any property portfolio’.

Revealed – where are the best places to be an investor right now? ...

When it comes to investing in property, strong rental yields are...

Manchester, once an integral part of Britain’s Industrial Revolution, remains one...

Leeds and Manchester are top buy-to-let locations for parents of undergraduates ...