UK rental prices fell for the second month in a row in June, according to the latest HomeLet Rental Index.

The data shows that the average monthly rent fell last month by 0.3% when compared to the same time last year, taking the average rent agreed on a new tenancy during June to £908, down marginally from £910 in the corresponding month last year.

Rental price falls in the capital led the way, with average rents falling by 2.6% in June this year compared with the same month in 2016; the average monthly rent in the capital now stands at £1,524.

Rents in London have dropped on an annual basis for three months in a row, having increased more quickly than anywhere else in the country during the first half of last year; rental price inflation in the capital peaked at 7.1% in June 2016.

While demand for private rental property remains high relative to supply, HomeLet’s data suggests that landlords continue to be conscious of affordability issues for tenants, which partly explains why five of the 12 UK regions covered in the research saw rents fall.

UK rental price inflation has now been declining for 12 months, since June 2016. At the time, rents were up 4.5% on an annual basis, but since then the rate of growth has dropped gradually each month to reach -0.3%, but it is worth noting that the rate of decline between May and June remains unchanged, suggesting that the rental market is now stabilising.

Martin Totty, chief executive of Barbon Insurance Group, HomeLet’s parent company, said: “It is now a full year since rental price inflation in the UK peaked at 4.7%, since when we’ve seen progressively more modest rent increases and, over the past two months, falls in some areas of the country.

“June’s figures are the first indication that this trend may now be beginning to flatten out, but it’s too early to say this with any certainty – the next few months of data from the HomeLet Rental Index will provide crucial intelligence on the direction the market is taking.” 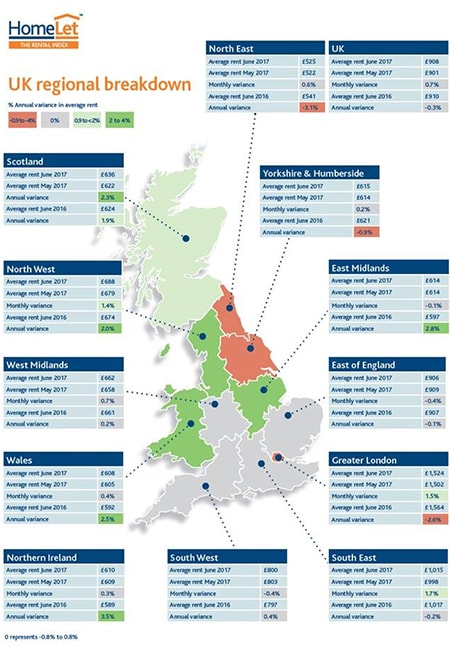 Average rents falling as landlords pledge to hold firm for first half of 2016 ...

Average rent on new tenancies agreed over the three months to...

Subsidence – would you know if your investment property had it? ...

Along with Japanese knotweed, it’s one of the issues that can...