People borrowed more than £17bn in new mortgages last year in order to buy property in London, as homeowners, investors and lenders continue to view the housing market in the capital a safe haven despite Brexit.

According to Lendy, the peer to peer secured lending platform, 17 of the top 20 areas for new mortgage lending in the UK last year were in London, with affluent neighbourhoods, including Wimbledon and Wandsworth, dominating the borrowing league table.

Wandsworth leads the table with £472m of new lending in 2016 alone, while leafy Wimbledon is in second place with £408m in new mortgages.

The highest non-London area among for new mortgages is Maidenhead, which placed 11th out of the 2,717 postcode areas in the study. The Berkshire town, where prime minister Theresa May is the MP, racked up £301m in new mortgages last year. 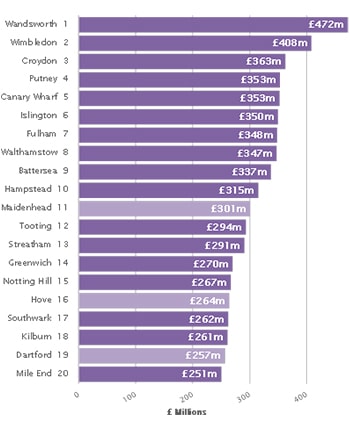 Lendy adds that the £8bn in new mortgage lending in London’s SE and SW postcode areas in 2016 was more than the £6.8bn in the whole of Wales over the same period, and practically the same as the £8.2bn in Scotland.

The £17bn in new mortgages in London in 2016 amounted to 13% of the £131bn in new lending across the entire UK residential market last year.

Liam Brooke, co-founder of Lendy, comments: “Lenders have continued to pile into the owner-occupier market, and South London is still their favourite place to lend.”

“House prices in areas like Wimbledon and Wandsworth have continued to climb sharply, even through Brexit. Lenders view them as a safe bet, and continue to commit billions of pounds in new lending to them.”

There has been a sharp increase in the number of commercial...

A growing number of property investors unable to secure finance from...