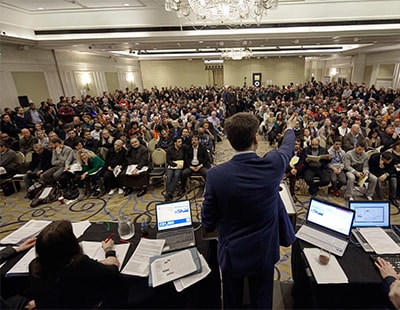 The property auctions market continued to slow across the UK last month, with the number of lots offered and sold at auctions falling, the latest figures show.

The annual decline could be largely attributed to the unprecedented spikes in market activity recorded in February and March last year as property investors, particularly buy-to-let landlords, rushed to acquire property ahead of the stamp duty change deadline at the start of April 2016, after which a 3% surcharge was added for second homebuyers and buy-to-let investors, according to David Sandeman, managing director at EIG.

“We may also be witnessing a market which is just easing back the throttle a little,” he said. “It wouldn't be unsurprsing either, considering that the government has recently introduced measures to try and cool the buy-to-let market whilst house price inflation has also seemingly slowed.”

Despite the drop-off in numbers, Sandeman said it was encouraging that auctioneers are still seeing an average sale rate of around 75% which shows sale rooms remain “competitive with buyers aplenty”, he added.

Figures for Q1 show double-digit falls in lots offered, sold and amount raised, but Sandeman insist that “it should not be cause for alarm” as it is almost entirely due to the “record-breaking activity” witnessed seen in Q1 of last year.

Commercial lots offered increased by 7% in March, to 541 lots, up from 505 in March 2016, whilst sales grew by almost 5% to 418 lots sold. But the amount realised from commercial property sales fell by 14%, or £23m, indicating a rise in smaller lot sizes.

Investment activity in residential property across the UK continued to perform...

January was an extremely quiet month in the property auctions market...

Investors snap up properties at auction ...

Last month was a good one for the UK property auction...