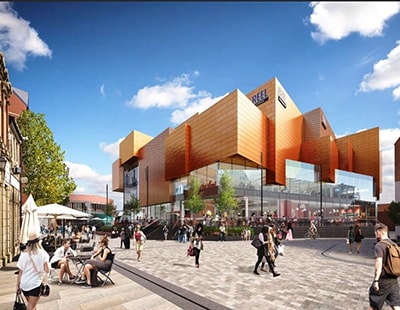 Plans for a new £60m shopping and leisure development in the heart of Rochdale town centre have been given the go-ahead by councillors.

Phase one of the 200,000 sq ft Rochdale Riverside scheme in the east of the town centre will feature around 24 shops, including a Marks and Spencer and Next, restaurants and a new cinema, which will be operated by Reel Cinemas.

Council leader Richard Farnell commented: “This is yet more progress for this important development, which will bring High Street names that are not currently represented in Rochdale, as well as thriving restaurants and a cinema, which will create a fantastic destination for our residents and visitors.

Gary Davies, of the Rochdale Development Agency, has also welcomed the boost that the new development will undoubtedly give the town centre.

“This decision is part of a wider regeneration which also includes the way the council has encouraged new retail outlets with discounted business rates - at present 17 out of 20 retail units are occupied in the town centre,” he said.

Councillors have also approved outline plans for the scheme’s second phase, which will see a further investment into the town centre, with potential for new offices, a hotel, flats and commercial space.

Mike Smith, Partner at Genr8 Developments, said: “We recognise that this scheme will play a significant role in the regeneration of Rochdale and it is therefore imperative that we attract the right mix of occupiers to boost the local economy and establish Rochdale as a key leisure and retail destination.”

Work could start on the site in Smith Street in the autumn.

Allsop’s May residential auction catalogue is ‘ripe with investment opportunities’ ...

Allsop’s upcoming residential auction, which will take place next week at...

A £1bn plan to regenerate Birkenhead has been unveiled by Wirral...