City level residential property price growth gained momentum in the first quarter of the year, rising by 3.5%, led by large regional cities such as Manchester, Birmingham and Newcastle, according to the latest Hometrack UK cities house price index, which tracks price movements across the UK’s 20 biggest cities.

Manchester remains the fastest growing city with an annual growth rate of 8.8%, followed by Birmingham at 8%, as attractive housing affordability together with record low mortgages rates and an improving economic outlook continues to support demand for housing in cities outside southern England.

Manchester, Birmingham and Newcastle are recording levels of house price increases not seen since mid-2005, offsetting weaker growth in southern cities like London, Oxford and Cambridge, where affordability pressures are having a negative impact on demand for housing.

According to the index, the annual rate of growth for the UK cities analysed is running at an average of 6.4%.

Richard Donnell, insight director at Hometrack, said: “Buyers outside the south of England appear to be shrugging off concerns over Brexit and a squeeze on real incomes to take advantage of low mortgage rates. 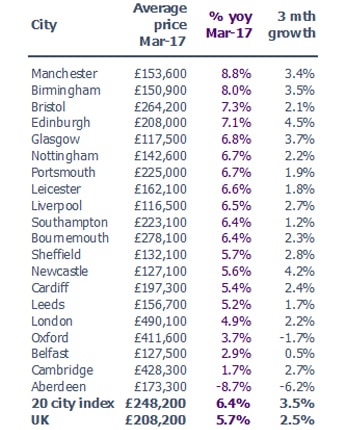 “This is shifting the dynamics of the housing market. Cities that have been driving house price growth over the last 2-3 years, such as London and Cambridge, are now seeing a significant slowdown while large regional cities continue to register robust and sustained levels of house price growth.”

Theresa May’s decision to call a snap general election may create some short-term uncertainty in the housing market, but when comparing the profile of sales volumes between election years and non-election years there is no material difference, Donnell said.

He added: “Compared to the level of uncertainty over Brexit, it is debateable whether the election will really make a material difference to buyers’ decision in the next two months.

“In our view the current market trends appear well set for the rest of 2017 where above average growth in regional cities offsets weak, single digit increases in southern cities.”