Asking prices in the housing market in England and Wales continued to rise in March, led by gains in the Midlands, new figures show.

Nationwide, the average asking price in March was £310,108, marking a 1.3% or £3,877 month-on-month increase, according to the latest survey from Rightmove.

Rightmove said the latest price increase reflects a lack of suitable homes for sale and is an indication of the “continuing resilience of the market” with strong demand from purchasers, but only for properties that have been priced accurately.

Miles Shipside, Rightmove director and housing market analyst, commented: “Since the start of the decade, the average March price rise has been 0.9%, so this month’s 1.3% uplift is an indicator of a shortage of suitable property for sale in many parts of the country, with strong demand for the right property at the right price.

“Since 2007 we’ve only once seen a larger rise than this in March, and we are also keeping pace with last year’s rise, which had the added momentum of investors looking to beat the Stamp Duty tax deadline of April 1.”

But on a year-on-year basis, asking prices are now increasing at a rather modest rate of 2.3%, down from annual growth of 7.6% a year ago.

The data shows that the East Midlands saw asking prices jump by 5.7% annually – higher than any other region.

The increase has taken the average price of a home there to a new record high for the East Midlands of £200,620.

The West Midlands has the second-highest annual asking price growth, with a 4.2% increase taking the average asking price there to £212,798.

Shipside added: “The price-rise crown has shifted from its previous strongholds. The pace is no longer being set by the more affluent commuter-belt south, including London with its international appeal. Neither is it set by the cheaper north driven by a mass of investors swooping on high buy-to-let yields.

“As markets in other areas of the country become more mature and run out of price-rise steam and froth, the fundamentals of the Midlands have come to the fore. Accessibly and conveniently located in the middle of the country, the area offers mid-range and relatively affordable prices at an average of around £200,000, whilst also exhibiting local economic breadth and strength.

“As other parts of the country suffer from varied factors such as highly-stretched affordability, changes in sentiment and increased economic uncertainty, it is the mighty Midlands that is the current powerhouse of price rises.” 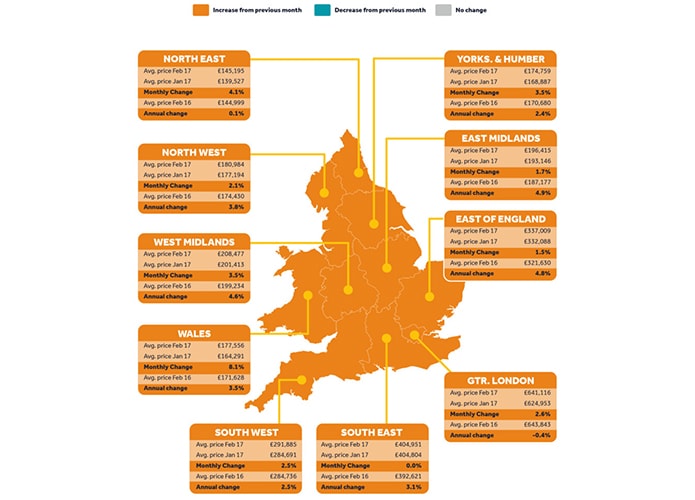