Residential property price growth continues to slow across parts of the UK, led by falls in London where annual home price inflation has dropped to 6.4%, the lowest level for 42 months, according to the latest Hometrack UK Cities House Price Index.

Given that property prices in the capital have increased by 85% since 2009, according to Hometrack, it is perhaps unsurprising that values are slowing, with the market intelligence provider expecting the rate of growth to slow towards 0% over 2017.

Cooler market conditions in the capital contributed to a slowdown in the headline rate of growth for Hometrack’s UK Cities Index, which is now running at 6.9%, down from 7.2% one month earlier and 7.9% a year ago. 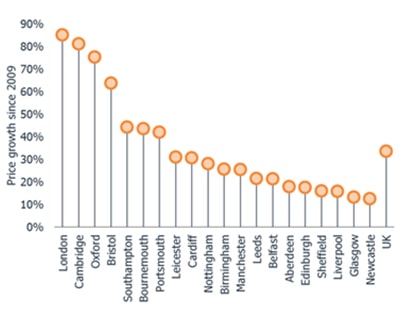 Outside of southern England, Manchester is registering the greatest uplift with an increase of 8.3% in the last year. In addition to Manchester, London has also now been overtaken by Birmingham, and Liverpool, where similarly prices are rising off a lower base and affordability levels remain attractive.

Richard Donnell, Insight Director at Hometrack said: “Growth in London has been superseded by large regional cities such as Manchester, Liverpool and Birmingham. When you consider that house prices in London are 85% higher than they were in 2009 it is not surprising that the pace of increases is slowing toward a standstill as very high house price increases mean affordability is stretched. 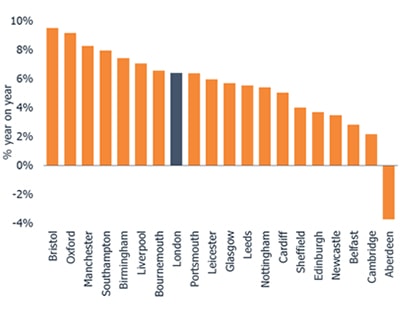 “The contrast with large regional cities outside of London and the South East couldn’t be starker. They continue to register robust levels of price inflation in excess of 7%. The question is how much further prices in regional cities could have to run were house prices to fully ‘price in’ low mortgage rates supported by rising incomes and employment.

“In our view there is material upside for house prices in the coming years in many cities where the recovery since 2009 has been limited. Typically those where investment in employment, infrastructure and regeneration will help stimulate the local economy. The timing and scale of future house price growth will, of course, depend upon the outlook for jobs, incomes and mortgage rates.”