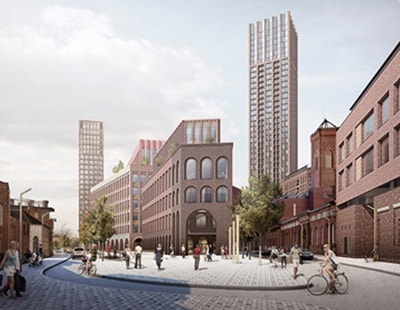 Initial plans for a £350m mixed-use scheme that would include Leeds’ tallest tower have moved a step closer to becoming reality after receiving a major planning boost following a decision by city planners to approve the project in principle.

Leeds City Council agreed that the pre-planning plans for the South Bank project, which is being developed by Commercial Estates Group (CEG), are ‘acceptable in principle’. It also backed the proposed phasing of the development.

But the committee said that the scheme project would require more public realm access, including a new public route along the disused railway viaduct in the area, while more affordable homes were needed as part of the residential element of the development.

According to existing plans, the scheme in Holbeck, southern Leeds, would feature 255,000 sq ft of office, hundreds of residential units and commercial space, including a 40-storey tower, across four adjacent sites totalling 2.4 ha in size.

According to council documents, the vast majority of the committee was supportive of the taller buildings in the development, but it emphasised the need for an ‘iconic design’ for the buildings before they could be given the green light.

Properties in the East Midlands to be showcased to potential investors ...

With more investment going into the area, the economy in the...