Allsop continued to demonstrate market buoyancy last week posting a £56m total from its September residential auction sale, thanks to what auctioneer Gary Murphy described as “deep demand for sensibly priced stock at all level”.

In all 146 lots were sold this month, including 16 homes for £1m or more, with the total expected to rise significantly over the next week as the auction house goes to work on selling further lots post-auction.

“The sale room was extremely busy from the start” said Murphy (below). “We knew we had a strong catalogue, and with over £17m under our belts in sales prior, we were off to a great start. Market turbulence appears to have calmed down since the EU referendum. Those vendors who were prepared to get back in the water were not disappointed. There was deep demand for sensibly priced stock at all levels with hammer prices well ahead of expectations in many cases.” 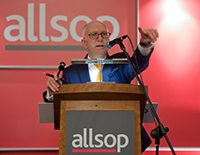 The sale featured a healthy supply of stock from a variety of housing associations. Much conversation post auction centred on a lengthy battle over a pair of adjoining freehold houses in Anerley, London SE20. Arranged as six two-bedroom flats and offered with vacant possession at a guide of £1.4m, they were knocked down after ten minutes at £1.91m.

The bidding for a two-bedroom garden flat in Godolphin Road, Shepherd’s Bush, London, W12, was also among those lots to outstrip its guide of £475,000 finally going for £577,500.

The £480,000 paid by an investor for a former hall building in Greenford, Middlesex, against a guide price of just £75,000, reflected high demand in the auction room for development opportunities.

“There was very keen competition for development opportunities,” said Murphy. “Sites or buildings with real potential are sought after currently. Planning or permitted development rights are preferred but not essential to success. As long as pricing is sensible the buyers are there today.”

He continued: “I was encouraged that this September’s total was ahead of the £50m we raised this time last year. We are receiving a good volume of potential instructions now for our next sale on 3 November. We expect to have a packed catalogue and another full room.”

Allsop raise £62.8m at first residential auction of the year ...