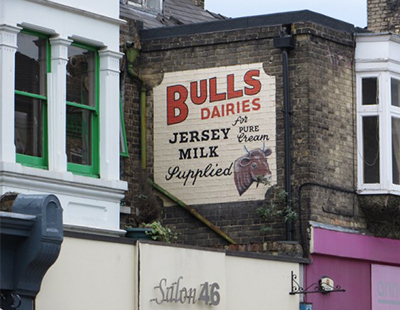 Auctions continue to prove to be an attractive and successful format with sales at Cheffins’ latest auction far exceeding guide prices.

Cambridgeshire surveyors and auctioneers said the star lot of the day was the Bulls Dairies building, one-time suppliers of Jersey Milk to the local residents in Cambridge.

Originally a dairy, the buildings on 44 and 44A Hills Road, Cambridge, were acquired by the Bull family in 1925 and have remained in their possession for almost 100 years. They have had a variety of uses over the years, including local favourite, Annabelle’s sandwich shop, and most recently, Manger to Go. The buildings still bear the original Bull’s Dairies mural, an iconic image on Hills Road, and which the owners would like a purchaser to retain if possible.

Number 44 and 44A Hills Road is a prominent, mixed-use investment property, including a commercial unit at ground and basement floors and a residential maisonette on the first and second floors. Minutes from Cambridge city centre, the building sold for £608,000, £183,000 over its original guide price.

There is a small rear yard with an external cloakroom, a series of sheds and pedestrian access to Russell Street. Above the commercial space, the residential maisonette has a private entry door from Hills Road. It comprises three bedrooms, two reception rooms and a kitchen. The property was recently let with a rent of £825pcm and there is an opportunity for this amount to increase following refurbishment.

In total, Cheffins’ latest auction raised more than £3m as “frantic” bidding drove many lots to sell for well above their asking prices.

Simon Gooderham, director, Cheffins, commented: “There was a real buzz in the room and some frantic bidding on many of the lots. There was an incredibly strong demand for amenity land throughout the Greater Cambridge region, in addition to fierce competition for Cambridge city centre investment opportunities.

“Due to the vast levels of investment into Cambridge from some of the world’s largest companies, such as Google, Amazon and Astra Zeneca, we have seen property auctions attended better than ever before. The Cambridge market appears to have the perfect storm of vast amounts of buyer-types, coupled with a lack of available stock, all of which means that prices have soared by 50% in the past six years.  Similarly, development opportunities are becoming ever-harder to find and are therefore achieving ever higher prices.”

Cambridge landmark to be sold under the hammer ...

The Bulls Dairies building, one-time suppliers of Jersey Milk to the...

More investors swap stocks and shares for bricks and mortar ...