Property insight – is the sun shining on Leith?

It’s best-known for its starring role in one of The Proclaimers’ most iconic songs –...

Eco property - do all options need to be on the table for green developments?

One of the very few silver linings of the current coronavirus pandemic has been the...

In this period of crisis, we have seen many examples of acts of kindness and...

High net worth (HNW) investors are increasingly looking to diversify their investment portfolios by looking...

Crossrail 2 is coming to London! The £27bn project is now well underway, which will link Surrey to Hertfordshire via London destinations, plus prompt the building of 200,000 new homes.

Though the north-south line is not set to launch until 2030, if you want to reap the future rewards, now is a great time to buy or invest along the route. After all, as we learnt with Crossrail 1, house prices along a new route are likely to increase significantly and quickly.

So where exactly along the line should you buy? 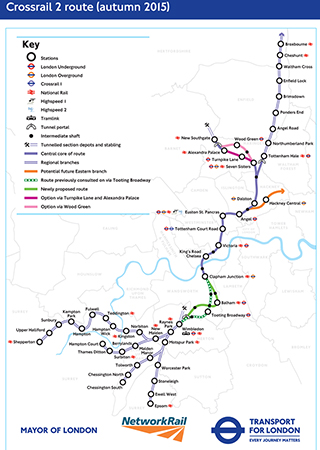 Battersea - the home of Clapham Junction station - is already in the middle of huge regeneration, with two new stations planned to be built at Nine Elms (London’s biggest regeneration zone) and Battersea Power Station by 2020. The longer-term intention is to extend the Northern line even further to Clapham Junction, which will no doubt push up prices in the area even further.

Battersea is already a popular area with renters, investors and homebuyers, but we expect demand to strengthen and property prices to increase as a result of Crossrail 2. The train line will cut journey times into Victoria and Waterloo to around 5 minutes, and spur further regeneration around the station.

This regeneration will likely have a knock on effect on surrounding areas such as Wandsworth Town too, where people currently commute into Vauxhall or Waterloo to change onto the Tube into central London. Crossrail 2 will take them straight into central London, to key hubs like Tottenham Court Road.

Wood Green is likely to be one of the biggest winners of Crossrail 2, as it enjoys a fairly central Zone 3 status and it is currently undergoing regeneration.

We are seeing an increasing number of homebuyers searching for more affordable property in areas in Zone 3, and improving transport links - like Crossrail 2 - and London’s growing population will only strengthen this demand.

The area’s hotspot status however is ultimately dependent on whether it becomes a Crossrail 2 station, and currently TfL are undecided as to whether the line should run through Wood Green or through Turnpike Lane and Alexandra Palace.

Wood Green will create the better property hotspot as it is more affordable than the other locations, and Crossrail 2’s regeneration plans, (a new public square around the Crossrail 2 station, thousands of affordable new homes, a new shopping centre and cinema, more high-street shops and employment space, plus a transformed pedestrian and cycle routes), will make the area an extremely desirable place to live and work.

Though Tottenham Hale may be a little rough around the edges, it attracts first time buyers in the bucket load as it’s one of the most affordable places to live and rent in London. A 1 bedroom property costs around £300,000 - plus you can get into the City in under 15 minutes on the tube, and regeneration is starting to smarten up the area.

It is already undergoing a transport revolution, with £110m investment being spent on a new tube, rail and bus station, road network improvements and public realm works which will be completed by 2017, and now it’s a proposed Crossrail 2 station, we expect property prices and its popularity to continue rising.

Crossrail 2 will also improve the already great transport links, with between 10 and 12 trains per hour in each direction operating directly to, and across, central London.

A new Crossrail 2 station is also proposed at New Southgate, which will slash journey times into central London and the West End and trigger regeneration in the area by providing the infrastructure needed to build new homes and create more jobs.

New Southgate is a family orientated, residential suburb, with lots of green spaces and good schools, and Crossrail 2 will no doubt bring even more families to the area, who want to be well connected to the countryside, central London and the North Circular and the M25.

Crossrail 2 will also bring neighbouring areas outside the North and South Circular, and in some instances outside the M25, up in value, as they will be significantly better connected. Areas such as Enfield Lock and Waltham Cross in the north and Hampton and Chessington in the south, currently rely on one key train, but Crossrail 2 will connect them to the larger London network, and make them much more desirable to investors and homebuyers.

It hasn’t yet been confirmed whether Crossrail 2 will route through Balham or Tooting Broadway, but whichever area is chosen is sure get a boost in terms of regeneration and property prices.

The new speedy service will put either Tooting Broadway or Balham in easy reach of Wimbledon’s and Wandsworth’ s lovely commons, and cut journey times in central London significantly - appealing to both families and young professionals who want a quick commute and affordable housing compared to neighbouring Battersea and Clapham.

Tooting is likely to benefit more from Crossrail as they currently rely solely on the Tube, whereas Balham offers the Tube and train so is already more accessible. A decision will be made this summer so we will keep you updated.

Leading housebuilders and housing associations, including British Land and the Berkeley...