Investor appetite continues to grow for most commercial property markets across Europe despite a sharp drop in the total investment volume recorded in the first quarter this year.

Despite the decline in the total amount invested in European real estate, several European countries that Savills analysed are enjoying increasing investment activity this year, led by Italy, up 54%. This was followed by Sweden (33%), Poland (15%), the Benelux (12%), and Finland (479% - due to some sizeable portfolio and retail transactions).

The strong performance of these markets shows that investor appetite remains healthy for quality assets in markets with strong fundamentals.

In terms of sectors, industrial has gained ground, increasing by around 19% year-on-year. This was driven mainly by transactions in the logistics and distribution sector in the UK, Germany, Sweden, Spain and The Netherlands, which account for more than 80% of the total activity.

Over half of the markets across the continent did record a decrease in transaction volumes in Q1. Lower volumes were observed in the markets which are ahead in the investment cycle such as: the UK (-48%), France (-47%) and Germany (-12%).

It is believed that upcoming political events and the stagnating European economy contributed were factors influencing investor sentiment and delaying decision making.

Savills however insists that these lower volumes are not a reflection of investor demand for real estate in Europe, but of the lack of stock currently available in the marketplace.

Eri Mitsosterigiou, director of European research at Savills, said: “Demand for commercial real estate in Europe remains strong amongst domestic and cross-border investors and deals are still closing at record prices. The predominant threat to an increasing turnover is the lack of good quality assets on offer.”

Savills predicts that in 2016 prime CBD rents will grow by 3-4% pa in London, by 3.5% in Paris and by 2% in the big four German cities. From a pricing perspective there is also still some space for further gains in the shopping centre and logistics sectors in Paris, if the yield levels achieved in the previous peak of the cycle are used as a benchmark. 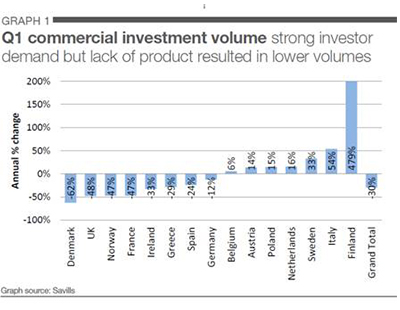 “There are markets that have not yet reached their full potential compared to their peak levels of investment activity in 2007,” added Mitsosterigiou. “These include the Nordics, the peripheral markets and the Benelux countries, where transaction volumes are still rising. The dynamic activity within these markets has been reflected in strong prime yield compression. There is still strong potential in these markets as some sectors, namely shopping centres and logistics, still have a way to go to reach their 2007 peak volumes, therefore offering attractive opportunities for investors.”