There was a sharp rise in the number of new homes under construction in February, despite an overall fall in construction output, new figures show.

Compared with January, construction output dropped by 0.3% in February, the Office for National Statistics (ONS) has announced. On an annual basis, growth in the industry remains weak at just 0.3%.

However, there was a significant increase in housebuilding, with work on private sector new housing rising by 10.6% compared with the same period last year, helping to slightly ease the supply-demand imbalance in the market.

The UK's housing supply shortage has been highlighted as a major factor behind the ongoing rise in house prices and the affordability crisis.

Andrew Bridges (pictured), managing director of Stirling Ackroyd, described housing as the “hero” of the construction industry as it leads the latest charge in light of the fact that “people need homes.” 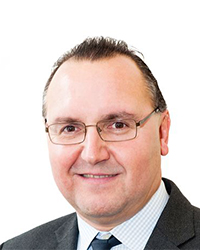 However, Bridges was also critical of housebuilders for not building enough new homes.

“The latest surge is inevitably flawed. New housing work could be galloping, as the ranks of renters and buyers swell every single month. But the doubts of planners are enforcing a dull and self-defeating march,” he said.

The housing shortage is most acute in the capital, largely because planning departments in London are still proving a major obstacle, according to Bridges.

He added: “The final quarter of 2015 saw just 7,240 new homes granted approval in the capital – well behind the levels needed to house a soaring population. Londoners want to be able to live in London and this should be fuelling growth in the construction industry. But until borough planning departments begin to approve more homes and allow developers to get building, all these plans are on pause.”

Bridges is calling on the next mayor of London to show “true leadership” in order “to get the scaffolds up, permissions granted and people in homes”.

According to the CBI, the next Mayor of London must commit to developing at least 50,000 new homes a year in the capital to help meet growing demand for housing.

The CBI’s recently released London Manifesto aimed at candidates in the election, which will be held on 5 May, insists that the next London Mayor must remain firmly focussed on business growth, to ensure that the city is an attractive hub for investment, creativity, skills and tourism.

Lucy Haynes, CBI London director, said: “From building the 50,000 homes a year the capital needs to house its talented workers, and a new runway that will boost our exports to high growth markets, to making the city a global beacon for digital and technological skills, London’s next leader has a unique opportunity to plan ahead, and position the city at the head of the pack.”

House price inflation across the UK dropped to 8.3% in the...

More than two-thirds of planning applications for the construction of new...