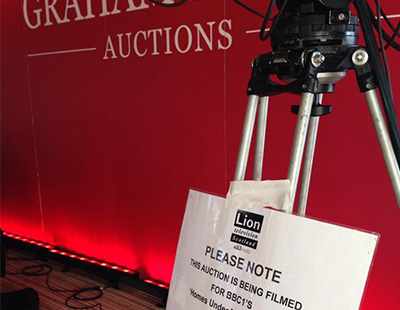 The BBC's Homes Under The Hammer crew were in Derby last week to witness Graham Penny Auctions raising more than £4m in sales at its second Derby auction of the year.

The auction, on Thursday 14th April at the iPro Stadium, featured a catalogue of 55 varied residential property, commercial property, land and other lots going under the hammer in front of a busy room of bidders.

Andrew Parker, managing director at Graham Penny, commented: “There were scores of excited bidders in our auction room all keen to see the gavel fall on the lot they had their eye on. We had a wide range on offer from investment properties to mixed use premises, development land and buy-to-let houses all receiving significant interest. Plus we had a number of different types of buyers from landlords looking for a buy-to-let through to owner occupiers looking for their next home."

Among the highlights was a three-bedroom detached house on Derwent Road in Ripley, DE5, which requires a full scheme of improvement and has scope to extend. The property was sold for £135,000 against a guide price of £85,000. But local experts tell us that the house would be worth in the region of £175,000 in excellent condition.

Elsewhere, a two-bedroom semi-detached property on Millfield Road in Ilkeston, DE7, also requiring a scheme of upgrading and improvements, was sold for £83,000 from a guide price of £45,000. The house would almost certainly fetch £100,000+ on the open treaty market post-works.

The highest yielding property sold on the day was a three-bedroom town house in Stapleford, Nottingham, NG9, which is currently let on an AST at £500pcm. The property was sold for £98,000, providing the new owner with a gross rental return of 6%.

TV crews and historic banks – a good start to the year for auctioneers ...

It's been a buoyant start to the year for the auction market, with SDL...