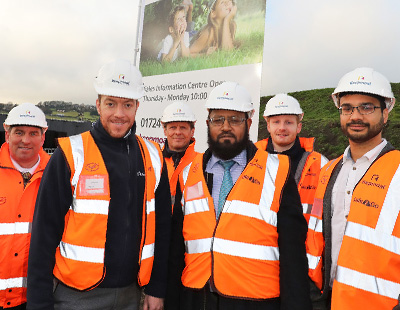 Keepmoat has broken ground at a new £43m residential property development in Bradford; which will see major local infrastructure improvements and investment in local education, as well as the provision of much-needed new homes.

The project will see 292 new houses built on a 14.8-hectare site on Allerton Lane over the next seven years.

First residents at what is to be called Heron’s Reach are expected to move in as early as April 2017, but what local investors will be most interested in is the fact that the major housing and regeneration project is poised to deliver significant public open space, off-site highways improvements and a £1m contribution for education infrastructure enhancements.

A series of public consultation events were held throughout the planning process and Keepmoat has assured it will continue to communicate openly with the public during construction.

Ian Hoad, Keepmoat’s regional director for Yorkshire West, said: “At a time when there is so much negativity and questions surrounding the housing crisis, we are delighted to have partnered Bradford Council and Hallam Land to make some significant inroads in tackling the provision of new homes in Bradford.”

“As with all of our new housing developments, we are also wholly committed to putting back into the community and we hope that over the course of the seven years, we will be using an entirely local workforce,” he added.

Legal & General has started work on its North London Build...