The annual rate of home price growth across 20 of the largest UK cities hit 8.5% in September, up from 8.2% in August, taking the 20 city average to £239,100, according to the latest Hometrack UK Cities Index.

There was a pick-up in overall property prices despite a marked slowdown in the level of growth recorded in large cities across the south of England, especially in London.

In the three months to September, residential property prices across the 20 big cities increased by just 0.9% - the lowest level of quarterly growth since January 2015 when concerns of a potential housing bubble, more stringent mortgage lending conditions and fears over the potential introduction of a mansion tax as proposed by Labour and the Liberal Democrats ahead of last year’s general election gripped the market.

Despite the ongoing uncertainty surrounding the terms of the UK’s exit from the EU, the steady rate of house price inflation continues to run more than three times faster than the growth in earnings, thanks largely to improved household confidence, earnings rising ahead of inflation and record-low mortgage borrowing rates. 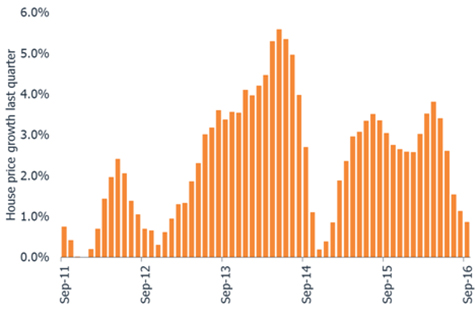 Eleven of the 20 cities that form part of the index have seen house prices continue to accelerate over 2016, led by gains in large regional cities outside the South East, such as Manchester, Liverpool, Birmingham and Cardiff, where prices are increasing off a low base.

Despite the slowdown, Bristol continues to register the fastest rate of annual growth at an average of 12.3%, although this is down from 13.1% in the 12 months to August.

In total, nine of the 20 cities monitored are now registering house price growth that is lower than it was at the start of 2016 with the greatest reduction seen in Cambridge, Oxford, London and Aberdeen. 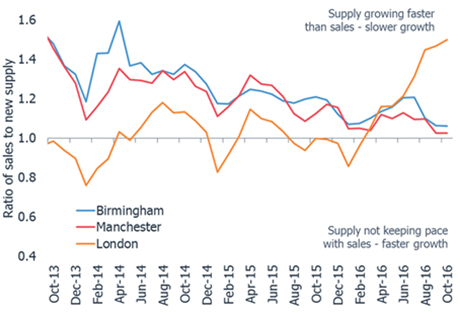 London, long considered to be the boiler room of the market, is no longer roaring, with market conditions continuing to cool as the supply of homes coming to the market grows faster than sales, which have fallen back in recent months as a consequence of stretched affordability levels and new taxes.

With the ratio of sales to new supply at its highest level for three years, the rate of house price growth in the capital looks almost certain to slow further in coming months.

Richard Donnell, insight director at Hometrack, commented: “In the immediate aftermath of the vote to leave the EU there was little obvious impact on the housing market and the rate of house price growth. Three months on and it is becoming clearer that households in large regional cities outside southern England continue to feel confident in buying homes and taking advantage of record low mortgage rates where affordability remains attractive for those with equity.

“In London market conditions are the opposite and new taxes are hitting investor demand while home owners face stretched affordability levels which are combining to slow the rate of house price growth.”