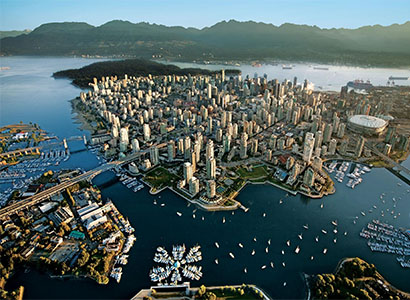 Prime residential property prices across the world’s major cities increased on average by 3.8% in the 12 months to September 2016, down from 4.4% in at the end of the second quarter, with Vancouver leading Knight Frank’s Prime Global Cities Index for the sixth consecutive quarter.

Vancouver’s surge in house prices of 31.6% over the past year was by far the highest in the world, but represented a fall from +36% in Q2, as the new 15% tax on foreign purchases contributes to the slowdown.

Across the board, it has not been an easy ride for luxury housing markets, particularly in places like London, Sydney and Melbourne, due to a range of factors such as higher taxes, investor concerns about bubbles, and political uncertainties caused by elections or the recent EU referendum held in the UK.

Despite an average annual growth rate of 3.8%, 18 of the 37 cities tracked by Knight Frank’s Prime Global Cities Index for Q3 2016 saw their rate of price growth slide compared with the previous quarter.

“Elections and referendums tend to provoke a ‘wait-and-see’ approach in the minds of buyers evidenced in the run-up to the UK’s Brexit vote in June and the forthcoming US presidential election,” said Kate Everett-Allen, the head of international residential research at Knight Frank.

Of particular note was the fact that home prices in prime central London dropped by 2.1% in the year to September, with stamp duty remaining a decidedly bigger influence on the prime London market than the EU referendum and in some instances the uncertainty surrounding Brexit has been a catalyst for overdue price reductions.

The average price of a Manhattan apartment exceeded the US$2m threshold earlier in 2016 and although sales activity has moderated, luxury prices in New York are proving resilient, according to Knight Frank.

Chinese cities such as Shanghai (23.4%), Guangzhou (14.3%) and Beijing (7.1%), dominate the top 10 rankings for annual price growth but local governments have enacted a range of measures this month to cool demand suggesting a more muted outlook.

Hong Kong, where luxury residential prices are 4.7% below their Q2 2015 peak, has halted its decline with prices rising by 4.1% in the three months to September. Strong demand has led to a recent upturn in sales.

Here are the world’s best and worst - performing housing markets: