Ski property developer MGM French Properties has recorded its best summer for five years with a 20% annual increase in sales in the French Alps, as UK property investors flock to the French Alps.

The figures include record sales during August and September with British buyers acquiring 60% of the new build apartments at Résidence Alexane, in Samoëns where apartment prices start from €240,000 (£214,000), according to MGM French Properties.

A host of different factors are helping to counter any Brexit concerns, including the availability of cheap mortgages in France, ongoing investment in growing resorts and more flexible leaseback rules. 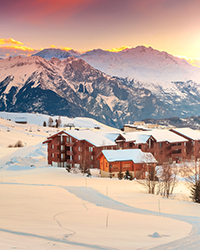 Laurent Hallez of MGM French Properties said: “Sales in summer 2016 were excellent with a 20% increase in the level of enquires compared to last year. This underscores our belief that despite uncertainty UK buyers will continue to invest in high quality overseas property.

“Over the past few months, we have found savvy British investors eager to buy up French property as they look to take advantage of the historically low interest rates and attractive mortgage packages.

“We are encouraged by the quality prospects ahead and look forward to a number of new leaseback and outright purchase developments in the Savoie region to be announced over the course of the season.”

Revealed – how has Covid-19 affected the ski property market? ...

Earlier this week, we conducted a Q&A with Mark Lightfoot -...

A new development has been launched in Sainte-Foy, the ‘ski paradise’...