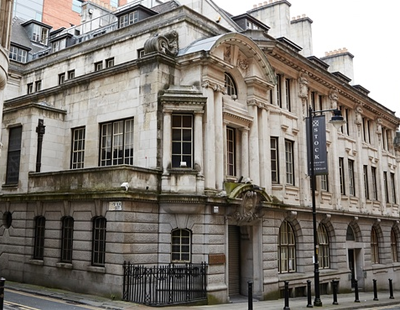 Former Manchester United players Gary Neville and Ryan Giggs have told around 30 homeless people who have set up camp in an empty building they own that they can stay for winter.

Neville and Giggs are currently in the process of converting the historic Stock Exchange building in Manchester city centre into a boutique hotel. On Sunday, however, it was occupied by a group of squatters and housing activists known as the Manchester Angels.

Since then, Wesley Hall, a human rights activist, said he had spoken to Neville on the phone and was informed that they could stay until February, when the building work will begin in earnest.

“He spoke to me. He said, ‘Look, I’ve not got a problem with you staying here, look after the building and respect the actual building,” Hall commented.

The squatters were evicted from an empty office block last week and Hall said of their situation: “These people aren't getting a nourishing meal, their immune systems are low and they are dying. All it needs is someone to put a roof over their head and give them a bit of support,” he said.

Wesley Dove, homeless for the last year and living in a tent, was delighted with the decision. “It's a beautiful building, now we know we can stay we can start doing work. It is a bit of security for winter.”

The historic, Grade II-listed building on Norfolk Street was purchased by Neville and Giggs for £1.5m. Planning permission to turn it into a luxury hotel has since been granted, with the former teammates – both part of the famous Class of 92 youth side that went on to dominate English football in the late 90s and early 2000s – bankrolling the project.

The 35-bedroom hotel will include a gym, spa, roof terrace for members and a ground-floor restaurant and bar.

With their future secured for the winter, Hall is already planning how Christmas will be celebrated, with the hope that a celebrity chef will provide them with a feast to remember. He has asked people who want to help to contact him on Twitter.

“I can’t quite believe it. The whole thing is a dream come true,” he said. “We’ve got a real opportunity to do some intensive work with homeless people and make a big difference to their lives.”

This week, we provide a rundown of the latest auction news,...